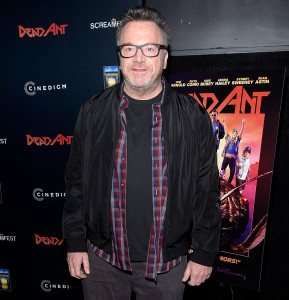 Tom Arnold and his estranged wife, Ashley Groussman, had been on the outs long before announcing their split on Monday, January 21.

Arnold, 59, exclusively told Us Weekly at the Los Angeles premiere of his film Dead Ant on Tuesday, January 22, that coparenting son Jax, 5, and daughter Quinn, 3, with Groussman hasn’t been easy.

“Now this stress has calmed down. I am the fun parent, but now we can work together. Well, now we can try. You can’t coparent when one parent is like, ‘Ugh, I hate you!’” the Roseanne alum explained, noting that the pair have been seeing parenting counselor Robin Berman for quite some time. “She’s written these great books about parenting. We went and saw her a couple years ago and I love seeing her and then, somehow, my wife just started seeing her by herself to coparent by herself. But we went last Friday, [January 18], before my wife moved out.” 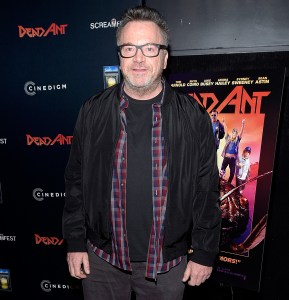 The comedian added to Us, “I want to continue seeing Robin Berman with my wife, because if we do that, we’re gonna be OK.”

Arnold confirmed his split from Groussman to Us on Monday, noting that the pair had called it quits after almost 11 years off marriage. “For the last couple years, couple three years, it’s been very unusual in the house,” he said. “But my kids and I have a whole life, a whole wonderful life. I’ve been telling my wife, ‘It’s OK. Just do whatever you gotta do.’ So she moved out.”

The True Lies actor told Us on Tuesday that their children were coping well because they’ve hardly seen their parents get along.

“My daughter’s never seen us hug,” Arnold admitted, confessing that he and Groussman were living in separate sides of their L.A. home before she moved out. “One time, her mom came up to me and said, ‘I’m gonna be the bigger person’ and kind of power-hugged me and then kind of walked out. Then my daughter came over and power-hugged me and then my son power-hugged me. It’s the craziest thing in the world and, you know, my son will be like, ‘Dad, Mom hates you.’ And I’m like, ‘No, no, she used to love me! Look at these pictures. See, remember?’ I go, ‘Ashley, hey, remember when you were crazy about me? Let me tell you guys this story.’ And I tell these stories to try to get her going.”

Jennifer Garner, Ben Affleck and More Celebrity Exes Who Have Reunited After Splitting

Arnold also claimed that his in-laws, who have been staying at his house for quite some time, recently told his son that “they haven’t been fans of Dad for a while because of what’s been going on.”