The Lion of the East (2) by Femi Fani Kayode 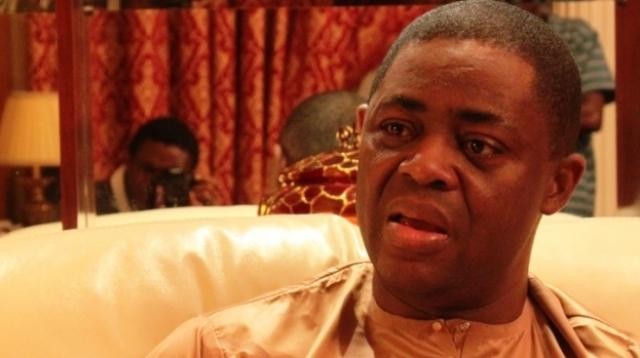 THE LION OF THE EAST (PART 2) By Femi Fani Kayode

Those from outside Igboland that say that they do not want Biafra have missed the point. It is for the people of the east to make that call and to make that decision and not for you.

What you believe is good for the Igbo or what you prefer for them is neither here nor there. Ultimately it is only THEIR choice and THEIR decision, which can only be made and established in a free and fair UN-sponsored and conducted referendum, that matters.

And in that referendum every single Igbo person, whether they be a traditional ruler, a chief, a wealthy business man, a pauper, a prince, a governor, a legislator, an elder-statesman, a student, a trader, a hairdresser, a bus-driver, a houseboy, a lawyer, a dancer, a singer, a landlord, a tenant, a judge, a clerk, a fisherman, a farmer, a taxi-driver, a secretary, a banker, a writer, a mortuary attendant, a pimp, a prostitute or a jobless man or woman only has one vote.

It is either “yes” or “no”. No single vote is more important than the other and each vote carries the same weight.

The arrogance of those that beat their chests and believe that they know how that vote or referendum will ultimately go is second only to the short-sighted fools in the British media and political class who never believed that the United Kingdom would vote for BREXIT and opt to leave Europe.

It is also similar to the willful blindness and self-inflicted delusions of the Obama and Clinton-controlled liberal-left of American politics who swore and honestly believed that Donald Trump would and could NEVER win the presidential election of 2016. They forgot the “God factor” in all matters touching and concerning the destiny of nations and men and what a shocker they got!

Those in igboland that say they are the true leaders of the Igbo and that their people do not want to leave Nigeria and establish their own country may get the biggest surprise of their lives when the time comes.

And not one of them can defeat Nnamdi Kanu in a free and fair election ANYWHERE in Igboland today. If they doubt that perhaps they should try putting it to the test.

The great black American freedom fighter Malcom X said “the price of freedom is death”. The 3 million Igbos that died in the civil war paid that price.

The thousands of young and courageous IPOB men and women who were massacred by security forces in the streets of the east and in the sanctity of their homes over the last two years have paid that price.

The hundreds of Igbos that have been killed by state-protected Fulani militias and herdsmen in their villlages and on their farms in the last two years have paid that price.

Then came the threat of genocide and carnage from the Arewa Youth when the Igbo were told that they must leave the north by Oct. 1st 2017 or suffer another whirlwind of slaughter and pogroms.

Those that will be killed in the north after that date and once that deadline has expired will also have paid that price.

Given all this I have one question to ask: if the Lord, in His infinate wisdom and mercy, can raise a deliverer like the great Sir William Wallace to liberate Scotland from the English in 1297 why would He NOT raise a Nnamdi Kanu to deliver the Igbo people after they have been subjected to genocide, mass murder, wickedness and injustice at the brutal hands of the Nigerian state for the last 57 years?

If the Lord can raise an Oliver Cromwell to deliver the people of England from the tyranny of the Crown in 1642 why would He not raise a Nnamdi Kanu for the Igbo in 2017?

If the Lord can raise a George Washington to fight for American independence from the subjugation of the British Crown in 1775 why would He not raise a Nnamdi Kanu for the Igbo in 2017?

If the Lord could raise a Maximillien Robespierre and Marat for the French people against the Bourbon royal family in 1789 and a Vladimer Lenin and Trotsky for the Russian people against the Romanov royal dynasty in 1917 why would he not raise a Nnamdi Kanu for the Igbo in 2017?

If the Lord could raise an Emeka Odumegwu- Ojukwu to deliver the Igbo people from total elimination, annihilation and extermination in 1967 why would he not raise a Nnamdi Kanu to deliver them from tyranny, mass murder and threats of genocide in 2017?

And the comparisons with Ojukwu are interesting. Both come from a royal and noble lineage and bloodline. Both went to some of the best schools and universities in the United Kingdom.

Ojukwu was at Oxford whilst Kanu was at the Metropolitan University (after finishing his first degree at Nsuka). Both were well educated and enlightened enough to recognise the chains of tyranny and both had the mettle and the courage to cultivate a firm resolve to stand against it.

One did so in the filed of battle when his people were subjected to genocide, denied the right of self-determination and attacked whilst the other did so through aggressive political activism and without firing a shot. Both are endearing, charming, handsome, charrismatic, articulate and profound.

Finally, like all human beings, both are fallible and made one or two mistakes and errors in their careers by what they said about others from time to time. This is to be expected because they are both human.

Yet it is not what they say about others that matters but what they represent. And what they both represent, which is essentially the protection of the weak from the tyranny and barbarity if the strong, is not only wholesome and righteous but also noble, honorable and worthy of emulation.

Few can dispute that the suffering of the Igbo over the last 57 years has been horrendous, disproportionate and barbarous. By any civilised standard it has been totally and completely unacceptable.

Oceans of Igbo blood, including that of infants and babies, have been shed and spilt over those years and that sacred blood not only cries to God in heaven for vengeance but also continues to plague, foul and soil the very foundation of the Nigerian state.
.

Not only has no remorse or regret been expressed or displayed for shedding that blood but instead those that have continuosly done so for no just cause for the better part of the last fifty seven years have been handsomely rewarded and well-compensated for their great evil and sociopathic disposition instead of being brought to justice.

When we go out of our way as a people to care for the weakest, the most vulnerable, the most villified, the most persecuted and even the most undeserving in our society it says a lot about us. And when we kill them at will and treat them like animals it means that we are no better than ravenous beasts.

The truth is that nothing and no-one can stop Nnamdi Kanu because there is a divine element to his meteoric rise.

God Himself has raised, lifted and annointed him and in doing so He has planted a seed, ignited a fuse and unleashed the spirit of Biafra in the mind, body, spirit and soul of the Igbo nation.

Whatever happens to Kanu today that spirit and that movement will not die but rather go from strength to strength.

The man has died in millions of Nigerians that have remained silent when faced with the tyranny and injustice of today’s Nigeria. But not in Nnamdi Kanu. The man has refused to die in him and still lives on.

He is the Lion of the east: I stand by him, I love him and I salute his courage. O that we had more of his ilk in our shores. May God defend him and may the Ancient of Days guide and protect Him. (CONCLUDED).