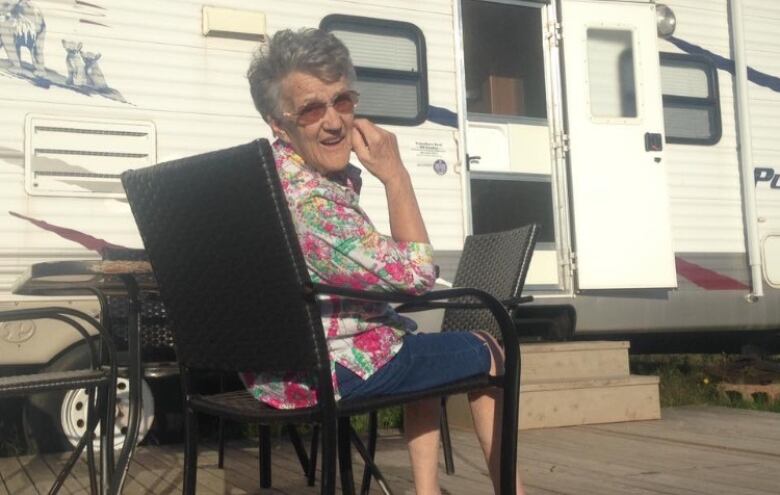 Lena MacKinnon has a busy life in Stratford, P.E.I., but earlier this month she found herself driving more than an hour and a half to Alberton, to spend days on end at her mother’s side, in the emergency department at Western Hospital.

MacKinnon’s mother, Edna Gallant, has dementia, and was in the ER for more than a week, waiting for a long-term care bed to become available.

While she waited, MacKinnon and her siblings took turns staying by their mother’s side around the clock.

“We even had to ask for a hospital bed, because she’s basically laying on a gurney. That’s not a great setup. And it’s not their fault, they’re not set up to accommodate someone that needs to stay there long term.”

While she doesn’t blame hospital staff, MacKinnon said she is concerned that there aren’t enough long-term care beds available in the province to meet the demand.

While caring for her mother, and helping her with daily tasks like using the washroom, MacKinnon wondered how long this would go on. In the end, Gallant spent nine nights in the ER.

“We were lucky, we have a solution quite quickly, really. A week and a half is not bad. But we could have been in that situation for six months.”

MacKinnon has seen her mother’s cognitive abilities quickly decline in recent months. Gallant moved into community care at the Tignish Seniors Home in the spring, because of mobility issues, MacKinnon said. The home offers apartment-style assisted living, but does not have nursing staff on-site.

But shortly after moving in, MacKinnon said her mother started wandering, and in the summer, she was diagnosed with dementia.

“We quite quickly learned that it was not the correct facility for my mom. With no nursing staff on-site … it’s not a good situation either for the staff or for my mother.”

MacKinnon said her mother went on the wait-list for a long-term care bed after her diagnosis.

But this month, MacKinnon got a call that her mother had tried to leave her home, and was out wandering in the rain. After that, MacKinnon said, staff told her they could no longer care for her mother.

“And rightfully so. It’s not the right location for her. The issue then was, there was no room to put my mother.”

MacKinnon said the wait in the ER was particularly difficult for her mother, because it was an unfamiliar environment.

“My mother’s been in an upset state. Not every day, not every minute of every day, but certainly more than she needs to be for the last week and a half. It’s not only a stressor on the family to be there 24/7, it’s really stressful for her,” MacKinnon said.

Gallant is not alone in waiting for a bed to become available.

According to the province, as of the start of October, there were 201 Islanders waiting for long-term care services, and as of Oct. 10, 46 people were in hospital beds waiting for access to a long-term care bed. Nine of those people, like Gallant, were waiting for dementia care in Prince County.

In a written statement to CBC News, Health PEI said there are times when hospital occupancy rates exceed capacity.

“Health PEI recognizes having patients stay in our emergency departments for extended periods of time when they no longer require emergency care, is not appropriate for the admitted patients nor is it a good situation for other patients waiting to access emergency care and our emergency room staff and physicians. Having said that, we make best efforts to ensure the appropriate medical care is provided to these patients in these circumstances.”

While her mother was in the ER, MacKinnon said she looked into long-term care options right across the Island. She said she would have taken a bed as far away as Souris if anything were available.

A week after arriving at Western Hospital, a bed became available at the Margaret Stewart Ellis Home in O’Leary, and Gallant moved in later that week.

MacKinnon is glad her mother now has a bed to call her own and can stay in western P.E.I. But she’s troubled by the whole experience — and worries about other families in similar circumstances.

“You’re literally, unfortunately, waiting at this point for someone to die, because there’s just not one more place for someone to go. To me, that’s a crisis.”

According to the province, there are 100 new long-term care beds in the process of being added to the system, with 38 recently added, and another 62 expected to open late this year or in early 2020.