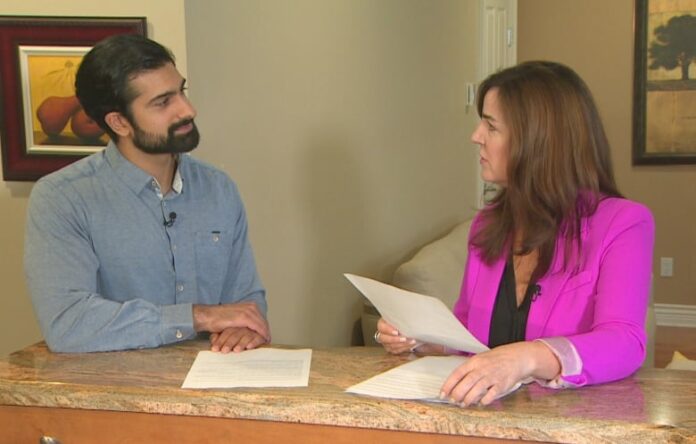 Sunjit Lidhar was awoken by a phone call from Scotiabank last February, informing him that $3,000 had been transferred out of his savings account and was gone.

“My heart pretty much dropped to my stomach,” Lidhar told Go Public from his home in Surrey, B.C. “We just assume our money’s safe.”

Soon after, the cybercriminals stole another $2,000. But worst of all, Scotiabank refused to reimburse him.

“It is not acceptable to have your money stolen from your account and the bank — which you trust so much with your life savings — tells you they can’t do much to help.”

Lidhar is the victim of a “systemic problem” of criminals breaking into people’s online accounts and stealing money, according to Christopher Parsons, a senior public policy researcher at the Citizen Lab at the University of Toronto’s Munk School of Global Affairs and Public Policy.

Parsons argues that the country’s banks, not their customers, should be financially liable when thieves raid customer accounts.

“We need to reverse the liability the banks currently impose upon individuals who are using the very services and tools that banks are providing.”

As soon as he learned about it, Lidhar says he changed his password, got a new debit card, asked Scotiabank to freeze his accounts and stopped banking online.

Scotiabank said it would investigate, but when Lidhar didn’t hear back after two weeks, he visited his local branch. While speaking to someone in the fraud department, they told him money was again being transferred out of his account.

“I was totally shocked and blown away that this was happening while I was in the branch,” he said.

Lidhar says Scotiabank took a few weeks to investigate, and then said it wouldn’t cover his losses.

In an email, Scotiabank said his claim was denied because the transaction was authorized from an internet address where he has “extensive history.”

Security experts tell Go Public that hackers can access a bank account from a victim’s IP address by taking over an infected computer and logging in as if they were that person.

Lidhar says Scotiabank wouldn’t explain how the fraud happened, adding that only he has access to his account.

“They’re trying to blame me,” he said. “And they haven’t told me anything about who it went to.”

In a statement to Go Public, a Scotiabank spokesperson said the bank “took immediate action and conducted a thorough investigation,” into Lidhar’s case.

“We take the concerns of our customers very seriously,” wrote Douglas Johnson.

After Go Public contacted Scotiabank, it offered to compensate Lidhar — six months after his money was stolen.

Go Public has heard similar stories from others — all saying their accounts were hacked, and that the banks often won’t reimburse them.

Most Canadians are unaware that more criminals are hacking into financial institutions in Canada and around the world, says security expert Limor Kessem.

“These threats are very real and very problematic,” said Kessem, an adviser based in Tel Aviv with IBM X-Force, an international team of investigators who track global security threats to the financial sector.

“In the beginning,” she said, “we would see that a banking trojan [a type of virus] would be targeting banks through their customers,” such as GozNym, a malware attack she helped uncover and that was shut down in May, as part of an international law enforcement operation.

It’s estimated GozNym stole over $100 million from some 40,000 victims. It’s an example of the sort of malware that might be responsible for the hacks against Lidhar, Hamilton and Chapman.

“And then we have a different type of attack,” said Kessem. “Cybercrime groups that will invade the banks’ actual infrastructure and get into their payment systems and start compromising them internally.”

Banks ‘should be liable’

It all points to the need for financial institutions to take responsibility when hackers steal customers’ money, says Parsons, the public policy researcher.

“They can’t just provide us tools or push liability upon us and then walk away,” he said. “One of the ways of correcting this would be to shift the liability structure. So rather than punishing customers … the banks themselves should be liable, so that they’re encouraged to build way better security and protect their customers from this sort of fraud.”

In the U.K., says Parsons, banking fraud was such a big problem, the government made banks responsible for financial losses to customers.

“And as soon as the banks had to take those losses, all of a sudden … fraud plummeted because the banks invested massively in security,” said Parsons.

He says Canada’s next government needs to follow the U.K.’s example.

“If banks themselves won’t do it, then it’s an area where legislation needs to be seriously considered. We can’t rely on customers to know about every kind of security vulnerability, to track every website that has breached passwords,” he said. “That’s just absolutely absurd and not a feasible solution to the problem.”

Go Public asked the Canadian Bankers Association — which represents Canada’s largest banks — whether its members would consider assuming liability when hackers break into the online banking systems they have created. A spokesperson did not address that question, but wrote, banks “have no higher priority than the security of their customers’ money and conduct comprehensive investigations of all fraud cases, some of which are complex and take time to investigate the specifics of the case.”

All the banks involved in these cases have told Go Public that customers are responsible for taking precautions to ensure their devices, accounts and information are protected.

Sunjit Lidhar says he’s stopped doing online banking and now heads to his bank branch instead — a hassle he says is worth it, for peace of mind.

He says he wrote to Go Public to let people know that banks could hold them responsible when hackers strike.

“I just want people to know that this is something that’s very real,” says Lidhar. “It’s not safe. And that’s something they [the banks] need to work on.”

We tell your stories, shed light on wrong-doing, and hold the powers that be accountable.

Coronavirus: What’s happening in Canada and around the world March 14

Is the coronavirus ravaging your investment portfolio? Here’s what you need to know

Canadian curling continues to get hammered by COVID-19 cancellations

Stay home, save lives: How Canada could avoid the worst of COVID-19

OPP move in on rail blockade by Tyendinaga Mohawk