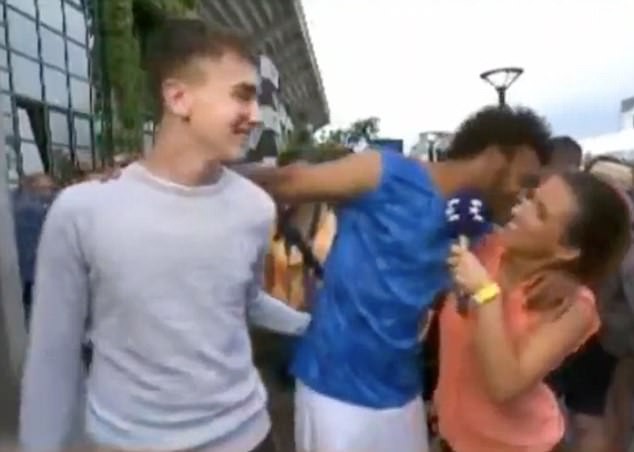 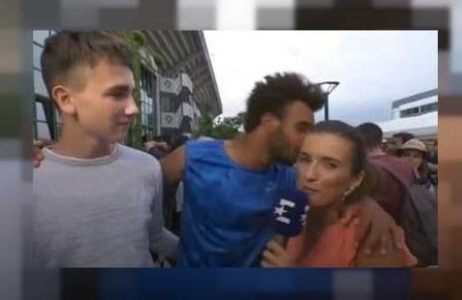 Tennis star and World No 287, Maxime Hamou has issued an apology for kissing a female reporter during a post-match interview at the French Open on Monday.
The 21-year-old from France on Wednesday was banished from the French Open by the French Tennis Federation (FTT) after he was shown live on TV grabbing broadcast reporter Maly Thomas around the neck, shoulders, and was seen forcing his lips on the reporter despite her efforts to pull away. (Watch the incident here)
Speaking to French newspaper l’Equipe, Hamou expressed remorse for the incident, saying he would like to apologize to Thomas in person.
‘I want to offer my deepest apologies to Maly Thomas if she felt hurt or shocked by my attitude during her interview.
‘I just lived a wonderful week here in Roland Garros living my most beautiful emotions as a tennis player, and I let my overflow of enthusiasm express myself awkwardly towards Maly, who I know and sincerely respect. Nothing of all that is written was my intention.
“I am at her disposal to apologise to her in person if she so wishes. I learn every day from my mistakes to become a better tennis player and a better person.”
Eurosport’s tennis correspondent Henri Leconte also apologized for applauding Maxime Hamou unwanted advances towards Maly Thomas when it was shown on Eurosport show ‘Avantage Leconte’.
I wanted to go back to the incident last night concerning the duplex with our reporter Maly Thomas and the player Maxime Hamou.I want to make it clear that we do not endorse this type of behavior. Maly is a great professional who deserves an apology,” said the former grand slam winner.
‘Our live response was also not appropriate, we should have intervened quickly. We apologise to our viewers,’ he added.
Share
Facebook
Twitter
WhatsApp
Pinterest
Linkedin
ReddIt
Email
Print
Tumblr
Telegram
Mix
VK
Digg
LINE
Viber
Naver
Previous articleFayose is now a parrot who must talk at all times- Afenifere asks him to stop attacking Buhari and face his state
Next articleFG bans sale of cigarettes to anyone below 18, list places where smoking is prohibited