Stonebwoy’s heartbroken girlfriend emerges 2days after his wedding, accuses the singer of playing and dumping her after proposing. 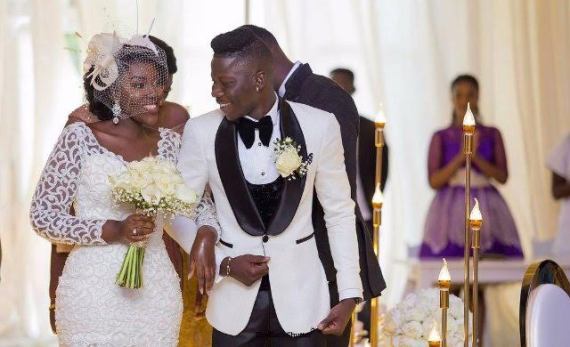 Following Stonebwoy’s lavish wedding to his wife Dr. Louisa Ansong last Friday, a lady claiming to be his ex-girlfriend has surfaced and is accusing the singer of failing to marry her after he proposed.
The lady who identifies herself as Betty Ama Fiona, a resident of Tema, claims that she was issued stern warnings by Stonebwoy’s colleagues to stay off the wedding or incur their wrath according to a letter published on Ghpage.com.
In the letter, she claimed to have met Stonebwoy when she played a part as a vixen in one of his videos.
She stated that on the 3rd day of the shoot, Stonebwoy proposed to her and they started dating in 2014 but asked her to keep the relationship private and away from media attention.
Read full text of the emotional letter below;
I’ve read and seen the many articles you’ve done on the dancehall artiste, Stonebwoy’s marriage. I appreciate your good works. Your blog- became the good source to some of us to feed our eyes with what was going on as I was given a stern warning by Stonebwoy’s crew member not to come there.
I have been crying since I saw the date of his wedding was published on your site and still can’t hold back my tears when I saw his wedding pictures yesterday.
I met Stonebwoy when I got the chance to feature in one of his videos.I must say, He is among the few celebrities I’ve met who carries himself very well. Respects himself and those he works with. Except on few occasions, he goes overboard when he gets angry.
To cut a long story short, he proposed to me after the 3rd day of the video shoot and we started dating in 2014.He wanted us to remain private as according to him didn’t want the media attention on us and I think he’s good at how he does it is just that he did to me and everyone with the secret relationship with the Doctor, Louisa is painful
We made love on several occasions, and though he didn’t promise marriage —what I find disturbing is why he didn’t even tell me about his marriage to the Doctor.
He cut off contacts suddenly and within a week I read he is getting married to the Doctor. Thought it was not true. Made several attempts to reach him but to no avail, until I finally saw the pictures on your blog Ghpage.com yesterday.
I watched the video and looked at the pictures with tears in my eyes. No wonder, he heavily guarded the premises with security. No chance was given to likes of us to enter.
I know people will say a lot of things about me for writing this to you.But Editor, this is the only time I feel I can make my case known or share my feelings.
There are a lot I did and planned with Stonebwoy and now I feel he used me and perhaps married the doctor for his own peculiar reasons.
Can you publish this for me for Stonebwoy to answer why he didn’t tell me or did this to me? Nevertheless, I still wish them a happy marriage.That’s life! (letter curled from Ghpage.com )
Stonebwoy who no doubt is enjoying his present status is yet to react to the accusation.
Share
Facebook
Twitter
WhatsApp
Pinterest
Linkedin
ReddIt
Email
Print
Tumblr
Telegram
Mix
VK
Digg
LINE
Viber
Naver
Previous articleSee moment crowd held down and kicked Finsbury Park mosque attack van driver as he shouted “kill me” (video)
Next articleGideon Yobo & Wife Blessing Welcome Baby Boy