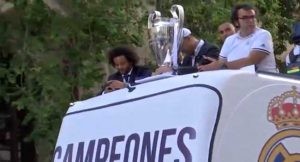 Real Madrid coach Zinedine Zidane and his men boarded an open top bus on Sunday as celebrations for their Champions League title continued in the Spanish capital following their 4-1 victory over Juventus in Cardiff.

Zidane can stay at Real Madrid for life, club President Florentino Perez said on Saturday, after the Frenchman became the first manager to win the Champions League two years in a row.

Real produced a ruthless second-half display after an evenly matched first 45 minutes. They put more goals past Juventus in 90 minutes than the Italian champions had conceded in their previous 12 Champions League games.

The impressive win crowned a remarkable first full season in charge for former Real midfielder Zidane, who led the team to a first La Liga title in five years, delivering the club’s first European Cup and league double since 1958.