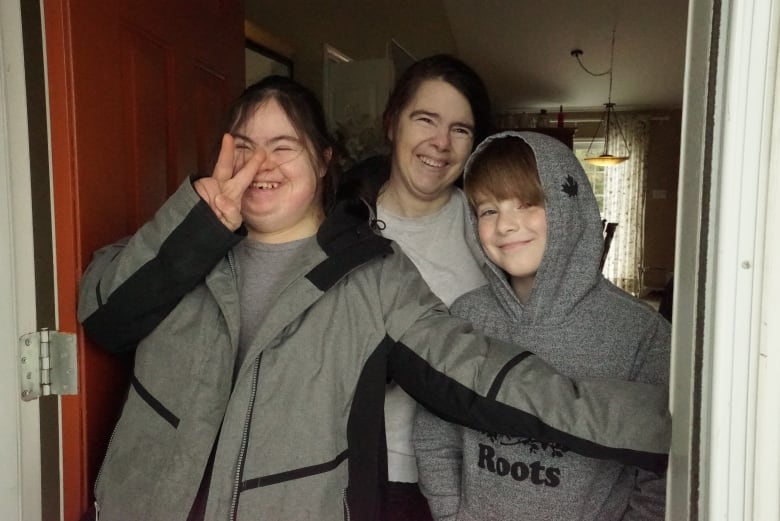 Amanda Robinson used to work part time five days a week for an organization that supports adults with disabilities. She went to bingo and bowling on the weekends and attended a Friday night social.

It all disappeared when COVID-19 struck.

Robinson, 36, has Down syndrome and is largely non-verbal. Her mother keeps her close to home these days because she worries about what will happen if her daughter contracts the coronavirus.

“Amanda going out puts her life at risk every day and she doesn’t even know it,” said Carolin Robinson, outside her family’s home in Halifax.

Robinson points to research in the U.K. that suggests people with Down syndrome who contract COVID-19 have a significantly increased risk of death. She is among the advocates across the country calling on governments to prioritize vaccinating people with disabilities.

Some Canadian provinces are prioritizing people with various disabilities to varying degrees, but Nova Scotia, which currently has 29 active cases of COVID-19, is among those that are not, unless the individuals live in congregate settings such as group homes.

Dr. Robert Strang, Nova Scotia’s chief medical officer of health, says the province is focusing on vaccinating by age, beginning with people 80 and older, and working down by brackets of five years at a time.

“We certainly understand lots of different groups thinking about their own risk or the risk within their group, and I understand that perspective,” he said during a recent interview at Nova Scotia’s Department of Health.

In fact, Strang understands better than most.

His son, who turns 16 in September, lives with severe physical and intellectual disabilities, including autism, chronic pain and a mutation in the GRIN2A gene that causes a range of neurodevelopmental disorders.

But Strang insists age is “by far” the biggest risk factor. He also said it’s important to have a vaccine program that is fast and efficient, and trying to figure out how to prioritize a range of conditions would significantly delay the overall process.

Because of his age, Strang’s son is going to be among the last to be vaccinated, he said. “But he’s going to be well protected because we’ve rapidly built herd immunity all around him.”

Nova Scotia has a higher percentage of people living with disabilities than any other province in Canada.

Krista Carr, the executive vice-president of Inclusion Canada, a national organization that works on behalf of people who have intellectual or developmental disabilities, wants all provinces and territories to create a separate vaccination category for people with disabilities and to clearly define who that will include.

“People with disabilities often have co-occurring health conditions that go along with their disability, so that puts them at higher risk for the virus,” she said.

She said by not creating a separate category to prioritize their vaccination, “we’re telling people with disabilities they don’t matter, and that’s just the wrong message to send.”

Some provinces are prioritizing in various phases

British Columbia plans to vaccinate people who are “clinically extremely vulnerable” including “adults with very significant developmental disabilities that increase risk” in Phase 3.

New Brunswick intends to vaccinate people who have “select complex medical conditions,” including people who live with Down syndrome, in Phase 2.

Ontario has released a specific list of conditions that put people at an “increased risk of serious illness and death regardless of age” and will be included in Phase 2 vaccinations.

Alberta says it will prioritize people “with underlying health conditions” in its Phase 2, but it has not yet determined the list of conditions that will qualify.

Strang not ‘rigid’ in thinking

Strang says he is very comfortable with Nova Scotia’s approach but is not “rigid” in his thinking and will make changes if there is a shift in the science, epidemiology or vaccine supply.

Robinson says the idea of building herd immunity doesn’t give her peace of mind. She says the risks are just too high and the statistics too stark.

“All my life, I’ve been fighting for her,” she said. “I’m her voice, and I wonder when I don’t need to be her voice, that it just happens because it should.”

Robinson said she’s not asking for her daughter to be first, just prioritized, so she can feel safer, sooner.