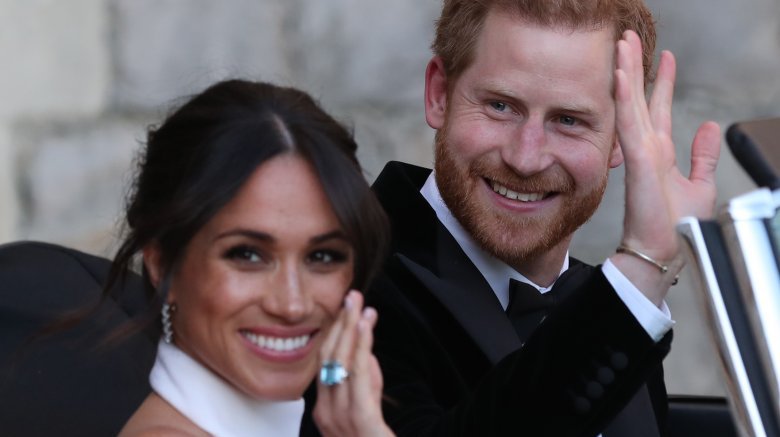 According to a TMZ exclusive, published on Monday, May 28, 2018, the royal newlyweds reportedly plan to honeymoon at the Fairmont Jasper Park Lodge in Alberta, Canada.

The gossip rag’s sources claim that the couple will stay at the luxurious, 6000-square-foot Outlook Cabin. Also known as “The Royal Retreat,” the remote cabin has a history of being visited by British royals. While King George VI and Queen Elizabeth The Queen Mother visited this location in 1939, Queen Elizabeth II and Prince Philip stayed there in June 2005.

As TMZ noted, “The resort ordered some gear and goodies it doesn’t normally keep on hand for Meghan and Harry.”

“Supreme comfort is present in every detail of the sumptuously comfortable bedrooms, enclosed verandas and majestic stone fireplace that warms both the dining room and great room,” the 700-acre mountain resort’s website reads. “The perfect place to entertain family & friends or celebrate a special occasion.”

Royal expert Katie Nicholl previously told Entertainment Tonight that the married pair planned to escape the media frenzy surrounding their wedding to an extremely private African destination, possibly in Zimbabwe or Namibia. However, according to another royal expert, these plans are subject to change.

“The honeymoon destination has changed a few times since they started planning,” Omid Scobie told Elle. “If a location leaks prior to travel, it compromises their safety on the trip, and they’ll be advised by their protection team to change plans. William and Kate’s protection officers ended up doing recon on two destinations before they settled on the Seychelles for their 2011 honeymoon. I heard that just over a month before the wedding, Harry and Meghan hadn’t even booked a destination, so these plans have come together rather quickly!”

At the time of this writing, it is not known when the Duke and Duchess of Sussex will go on their honeymoon.

As Nicki Swift previously reported, Prince Harry, 33, and Markle, 36, tied the knot at St. George’s Chapel at Windsor Castle on Saturday, May 19. The royal couple, who may be planning a visit to the duchess’ father in Mexico before jetting off on their honeymoon, announced their engagement last November. They have been together since the fall of 2016.