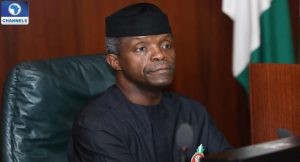 Others are the Minister of Agriculture and Rural Development, Audu Ogbeh; Minister of Budget and National Planning, Mr Udo Udoma; Minister of Interior, General Abdulrahman Dambazzau; and Minister of State for Environment, Mr Ibrahim Jibrin. Onuekwusi’s colleagues equally took turns to sign the register, set up by the State House correspondents.

The ministers paid glowing tribute to the late broadcaster, describing him as a true professional.

“Chukwuma was not just a state house correspondent, he was a friend. We all had reason to commend him for his professionalism, for his commitment, (and) for espousing the right ideals for people in government,” Dr Fayemi said.

Dr Fayemi, who said he knew the broadcast journalist for years, right from when he was governor of Ekiti State, said he was always friendly and professional.

Mr Fashola, on his part, extended his condolences to Onuekwusi’s family and Channels Television, said, “He was somebody that I had gotten to know over the years and more recently when I came to Abuja as a minister. We will miss him; he was a true professional and he had a style that was uniquely his.”