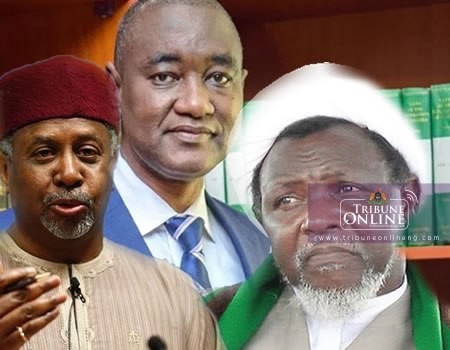 Sagay said this during an interview with The PUNCH while reacting to calls by the Nigerian Bar Association for the release of Dasuki and El-Zakzaky.

The senior advocate advised the Federal Government to either obey the court order by immediately releasing them or to appeal the orders.

“The court orders should be obeyed and I don’t know what reason the government has for not releasing them. If they have good reasons, they should canvass the reasons before the court and leave the court to decide.

“If the court rules against them, then they should appeal against the ruling and then apply for stay of the ruling pending the appeal. That is what the government should do rather than detaining them perpetually,” Sagay added.

The PACAC chairman also agreed with the NBA regarding the prolonged probe of judges without trial.

The NBA had, on Monday, asked the Federal Government to immediately stop the investigation of the judges so that they could return to work.

Sagay, however, called on the government to wrap up the probe by prosecuting the judges immediately or by dropping the cases.

He added, “The Federal Government should hurry up and if they cannot file the adequate charges, then they should inform the people involved and allow them to continue with their careers on the bench.”

The PACAC chairman, however, disagreed with the NBA regarding the non-confirmation of the acting Chairman of the Economic and Financial Crimes Commission, Mr. Ibrahim Magu.

The association had called on the legislature and the executive to work out their differences, adding that Magu’s issue had made Nigeria a laughing stock among the comity of nations.

Sagay argued that the NBA’s concern was misplaced as the President was empowered by the constitution to make some appointments without recourse to the Senate.

He stated, “What makes Nigeria a laughing stock in the face of the world?

YOU MAY ALSO LIKE: Dasuki being punished for his loyalty to Jonathan —Umar