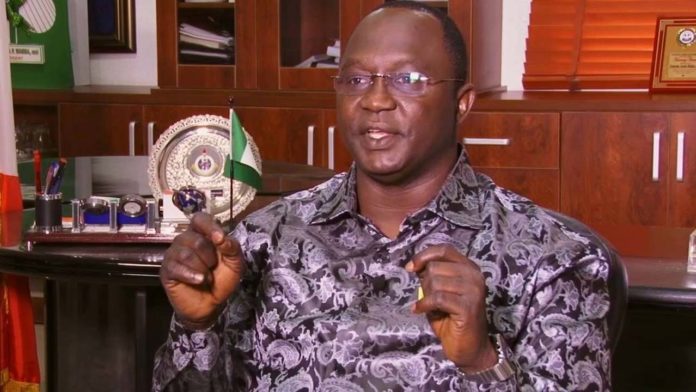 The Nigeria Labour Congress (NLC) has accused the Minister of Labour and Employment, Senator Chris Ngige of intimidating organised labour.

NLC President, Comrade Ayuba Wabba, in a statement on Monday, said Ngige wants to suppress workers over the disagreement about the board of the Nigeria Social Insurance Trust Fund (NSITF).

Wabba disclosed that the Ministry of Labour had asked the National Union of Petroleum and Natural Gas (NUPENG) to submit its statement of account for the year 2018 to the Registrar of trade unions within 72 hours in contravention of the law which stipulate 30 days for such request.

He said: “The Nigeria Union of Petroleum and Natural Gas Workers (NUPENG), an affiliate of the NLC has intimated us of the continued harassment, intimidation, victimization and persecution of its members and the leadership of the union by the Ministry of Labour under the watch of Dr. Chris Ngige, the Minister of Labour and Employment.

“NUPENG received a letter from the Office of the Minister of Labour dated 13th May 2019 with Reference No: ITU/FR/45/VII/15 requesting NUPENG to submit its 2018 Annual Financial Return within seventy-two (72) hours to the Federal Ministry of Labour and Employment.

“We wish to state that the directive by Dr. Chris Ngige for NUPENG to submit its Annual Financial Return within seventy-two (72) hours is in gross violation of Section 40 of the Trade Union (Amendment) Act 2005 and therefore an exercise in illegality and lawlessness.”

Wabba said that section 40 of the Trade Union (Amendment) Act states that “Without prejudice to the foregoing provisions of this Part of this Act, the Registrar may at any time call upon the treasurer, the committee of management or any other official of a registered body to prepare and submit to him within A PERIOD OF THIRTY DAYS from the date of the call letter detailed accounts of the funds of the body in respect of any particular period; and any accounts submitted under this section shall show in detail such information as the Registrar may direct, and shall, if the Registrar so directs, be audited by the duly appointed auditor before being submitted to the Registrar”.

According to him, “In view of the above quoted provisions of the Trade Union Act which the Minister of Labour and Employment is under oath to protect and defend, we wish to unequivocally posit that the cruel urgency communicated in his letter suggests only one thing – unveiled desperation to disorganize and destroy trade unionism in Nigeria.

“It is also not a coincidence that this is coming on the heels of our recent protests against the activities of the Minister of Labour and Employment to undermine organized labour and trade unions in Nigeria.

“We wish to remind the Minister that the right to protest and picketing are guaranteed by Section 40 of the Nigerian constitution, Section 43 of the Trade Union (Amendment) Act and Conventions 98 and 78 of the International Labour Organization (ILO).

“Article 2, part 1 of the ILO Convention 98 explicitly forbids government and employers from meddling in the affairs of trade unions, providing that ´Workers’ and employers’ organizations shall enjoy adequate protection against any acts of interference by each other or each other’s agents or members in their establishment, functioning or administration.´

“We are privy to the fact that shortly after our last protest, a directive was issued from the office of the Minister of Labour to officers in the Ministry of Labour and Employment to fish for grounds on which to deal decisively with organized Labour. We understand that the Nigeria Labour Congress is the primary target in the current overdrive to run trade unionism in Nigeria underground.

“It was only when the fishing expedition failed to grab anything against the Nigeria Labour Congress that the hunters turned their barrels on NUPENG. This attitude of vindictiveness is not only unbecoming of “the only competent Authority on Labour matters” but also uncivilized, ungentlemanly, undemocratic, uncut and unpolished.

“Unfortunately, even the most despicable dictators in global annals have never descended to this low of shameful abuse of public office and trust to hound, persecute and terrorize innocent workers, national labour centres and their affiliate unions.

“It is highly disgusting that this behaviour is coming from a so-called democrat who has had the privilege of seeking public acquiescence especially the votes of workers while contesting for the position of the governor of a state.

“Given that the intention of the Minister’s recent directive is aimed at achieving narrow, petty and selfish ends, we demand the withdrawal of Dr. Chris Ngige’s letter to NUPENG dated May 13, 2019, Ref. No. ITU/FR/45/VII/15. We also call for a public apology from the Minister of Labour for yet another round of assault on organized labour in Nigeria.

“Furthermore, we demand that the Minister of Labour and Employment publicly guarantees that he would desist from further harassment, victimization and persecution of workers, our trade unions and the two labour centres in Nigeria. We do not wish that the current fragile industrial peace in our country collapses completely on the account of endless provocations by the Minister of Labour and Employment.”