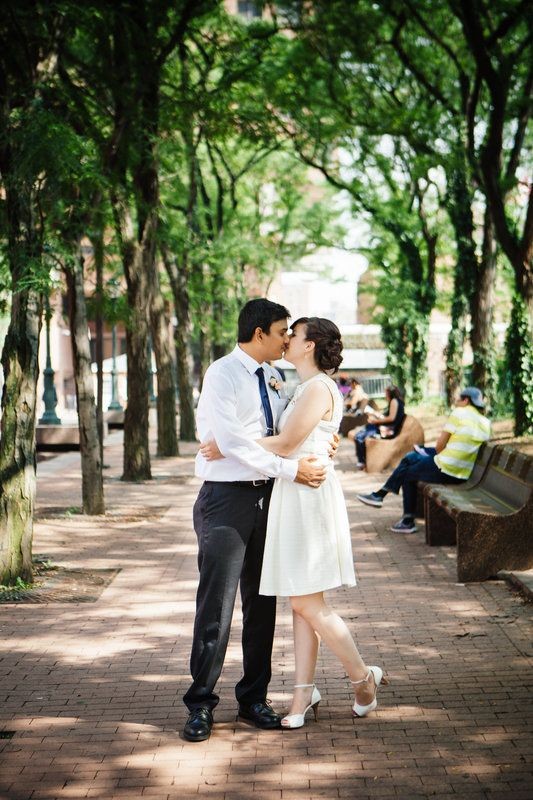 The bride is 29-years-old, Gemma, and she works for a well known fashion designer on their international marketing team. She is well travelled, well educated, and extremely down to earth. She loves exploring new restaurants and often dreams of a life in France. In fact, she and her fiancé were engaged in Paris. Her groom, Patrick, is originally from London and studied at Boston University (where the two met) before beginning a career in finance. He fell in love with Gemma’s smile, her effortless charisma and love of meeting new people and places. They bonded further over their tight knit families and common love of reading and history.

After getting engaged, they realized that bringing together their large international families for a destination wedding was something that would create a large financial burden on them both and their start together. They also didn’t want to burden their parents with an elaborate celebration and quite quickly they both fell in love with the idea of eloping. They had made a home together in New York City and it felt fitting that their marriage begin there as well. As their talks continued they knew they would want to involve their immediate family and friends and it was an easy decision to bring their closest friends and family to New York to celebrate with them in what would be an intimate and memorable dinner celebration in the city. They decided to marry privately at City Hall and with fashion being a passion for Gemma they would still dress exquisitely, her selecting a stunning, fashion-forward gown and he in a tuxedo. After their private ceremony they would explore the city with a photographer they both loved and capture images to celebrate their milestone. That evening Gemma would change into a timeless dress and join their waiting family and friends for a candlelit dinner at the top of the Gramercy Park Hotel. They would dine, toast and cut a cake while their closest family celebrated their new beginning alongside them.

Following their intimate celebrations they would embark on an adventurous honeymoon to the beaches of the Seychelles followed by a week long safari in Africa.