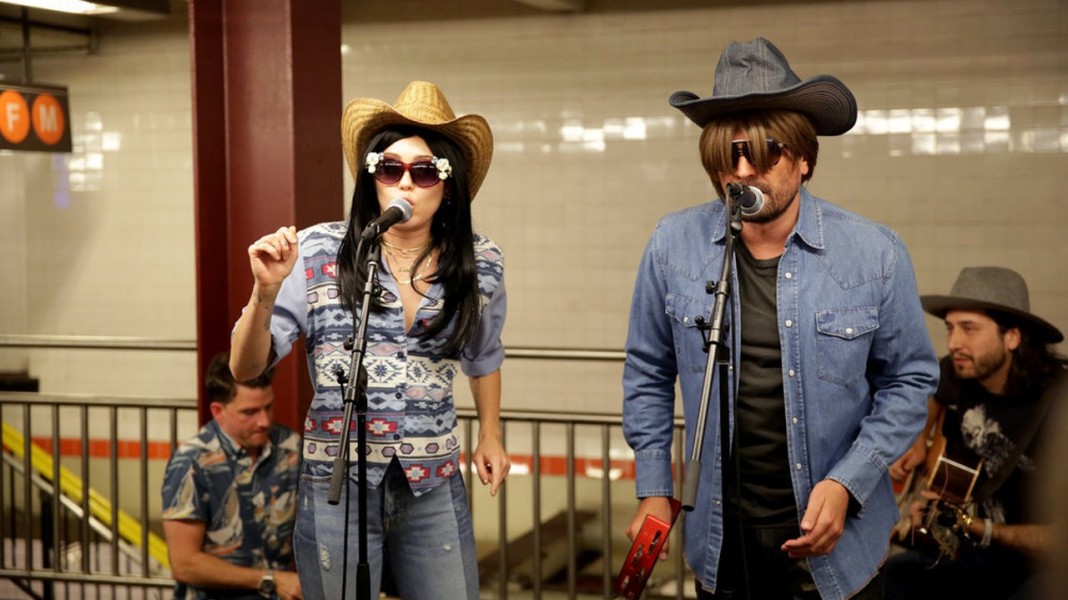 Even though she hid behind sunglasses, the singer’s husky voice was instantly recognizable—and a few savvy subway riders realized something was up. Fallon assisted her by playing the tambourine and singing backup. The crowd grew in size, recording the concert on their phones.

Once the song ended, Fallon realized the jig was up and removed his wig. “We’ll do one more song for you!” he told the crowd. Before launching into a stripped-down version of “Party in the U.S.A.,” Cyrus admitted, “This is my first time at the subway station. This is exciting s–t for me!”

The bit was filmed for Cyrus’ Tonight Show takeover, which also included performances of “Inspired” and “Malibu.” Once she was back in the studio, Cyrus talked more about her “first subway experience” with Fallon. “I will always remember it. I don’t think it’s like anyone else’s first time. I don’t get a lot of first times anymore. I’ve been every kind of crazy mascot. I’ve done a lot of crazy things, as everyone knows. That wasn’t the craziest thing I’ve ever done—even a little bit—but it was definitely memorable,” the pop star raved. “The most appropriately crazy!”

Fallon revealed the bit was filmed in “10 minutes, max.”

“It was crazy,” Cyrus said in agreement. “And I didn’t know how recognizable we really would be. I mean, you were getting called Billy Ray Cyrus. Right on! You were in disguise—they knew it was me! They thought it was me and my dad. I thought it was me and my dad! And then you took [the wig] off and I was like, ‘Holy s–t! My dad is Jimmy Fallon!'” Jokes aside, Cyrus said she hadn’t performed “Party in the U.S.A.” for a while, so it was “super cool” to sing it for an audience again. “It’s always good for me to remember people really love those classic songs and it inspires me to do them more. I’m excited that it makes me re-love my songs, because I love how much people love them…To re-fall in love with songs that I’ve been singing for years and years, it’s fun to just have fun singing them. Because you sing them so many times, and so when you see how much they mean to other people, even if it’s something as silly as ‘We Can’t Stop’ or ‘Party in the U.S.A.’ or whatever it is, it makes people happy. That’s what I like to do.”