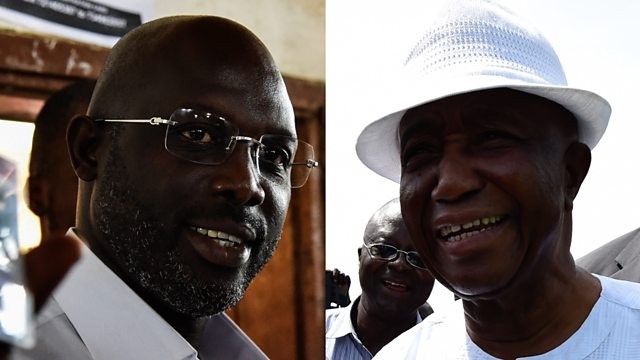 Mr Weah, 51, won the first round, but did not secure the required 50% of the vote for an outright victory.

Turnout seems to have been low, but the result is expected to lead to the first smooth transfer of power in 73 years.

More than two million people were eligible to cast their ballots in the nation of 4.6 million people, founded by freed US slaves in the 19th Century.

The result is expected later this week.

Who are the contenders?

The contest between Mr Boakai and former top-flight footballer Mr Weah has been a stop-start exercise beset with legal wrangling.

Mr Boakai, 73, has been Liberia’s vice-president for 12 years but does not seem to enjoy the support of his boss.

“This is a great day because it is a test of democracy,” he said after casting his vote.

Mr Weah is hoping that it will be third time lucky. ”I am not associated with losing. Today’s victory is certain,” he told supporters.

The former AC Milan and Paris Saint-Germain player defeated Ms Johnson Sirleaf in the first round in 2005 but lost to her in the subsequent run-off.

In the following election’s run-off, in 2011, when he ran as a running mate to the opposition candidate, his coalition boycotted the vote, citing irregularities.

Despite indications of a low turnout, Liberia appears to have created the conditions for one elected president to hand over to another through the ballot box.

There’s still room for contestation, as the 10 October first round showed. The poll was followed by weeks of legal wrangling that ultimately led to the run-off being delayed. There were two petitions alleging fraud, including one from Mr Boakai.

Election observer groups will issue their preliminary comments over the next few days and the National Electoral Commission says the result will be confirmed within days.

Why was the vote delayed?

A representative for the opposition Liberty Party, Charles Brumskine, who came third in October’s first round, challenged the result, saying it had been marred by “massive fraud and irregularities”.

But earlier this month the Supreme Court ruled that evidence of fraud was insufficient to merit a re-run of the opening round, and the run-off, originally due on 7 November, was announced.

Was the vote fair?

Weah supporters had alleged some ballot-rigging, although there was no immediate official confirmation. George Weah himself said, after casting his vote, the election had been “peaceful and good”.

Goodluck Jonathan, the former Nigerian president, who is an observer at the election, told the BBC he was certain it would be free and fair despite “some challenges”.

Ms Johnson Sirleaf praised a violence-free electoral process, saying “the ballot box has replaced bullets and electoral disputes are settled through the courts”.

Christopher Fomunyoh, an election observer from the National Democratic Institute, told the BBC that voting had gone much more smoothly than the first time round.

Why was this election so important?

This will be the first time for many generations that Liberians witness a transfer of power from one elected leader to another.

Ms Sirleaf took office in 2006, after her predecessor, Charles Taylor, was forced out by rebels in 2003, ending a long civil war.

Taylor is serving a 50-year prison sentence in the UK for war crimes related to the conflict in neighbouring Sierra Leone.