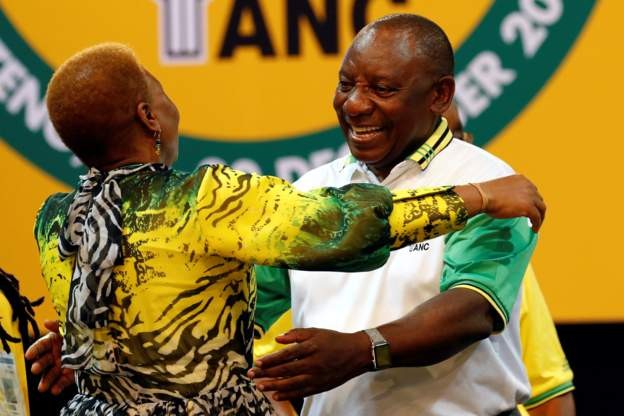 Mr Ramaphosa is in a strong position to become president in 2019 polls.

The leadership battle caused fierce political infighting, raising fears the party might split before the election.

The result triggered celebrations among party delegates in Johannesburg and also on the streets of the city.

Media reports said earlier that the announcement had been delayed, with Ms Dlamini-Zuma’s camp demanding a recount.

The voting process started on Sunday.

Cyril Ramaphosa at a glance:

What were the differences between the two candidates?

He campaigned as the anti-Zuma candidate, promising to target corruption, and his victory could mean that the ANC decides to recall Mr Zuma as national president in the next few weeks.

The ANC recalled Mr Zuma’s predecessor, Thabo Mbeki, in 2008 after Mr Zuma replaced him as ANC leader the previous year.

Ms Dlamini-Zuma, 68, had been critical of the enduring power of white-owned businesses and had pledged to tackle what she said was continued racial inequality.

Analysts said that Mr Zuma had backed his former wife.

The ANC election came amid declining support for the party, though opinion polls still suggest backing of about 50%.

To say the atmosphere inside the plenary was electric would be quite the understatement – the singing inside the hall reached crescendo point as it was announced that Cyril Ramaphosa is the new president of the ANC.

There was a touching moment when Nkosazana Dlamini-Zuma came on stage and hugged the man who beat her – by less than 200 votes – to the top job in the party, and put a halt to her ambition to be South Africa’s first female president.

The ANC has been torn apart by infighting of late, and the leadership battle was particularly bitter.

There is much work ahead for the new leader of the liberation movement.

Not only does Mr Ramaphosa need to unite his party, he also needs to convince the electorate that the ANC still represents the issues of the people it fought to hard to bring freedom to.

What next for Zuma?

In theory he could remain South African president until national elections in 2019, restricting Mr Ramaphosa’s room for manoeuvre.

But it’s extremely likely that a victorious Mr Ramaphosa will seek the “recall” of President Zuma by the ANC.

If that happens, then things could move very quickly, and a President Ramaphosa would probably move fast to remove Mr Zuma’s allies from key positions.

The heads of the National Prosecuting Authority and the state power utility have, for instance, faced particular criticism.

Opinion polls suggest that the ANC stands a better chance of shoring up its waning popular support and winning the 2019 elections under Mr Ramaphosa’s leadership.