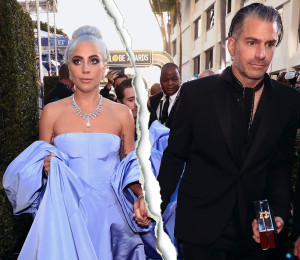 It’s over. Lady Gaga and her fiancé, Christian Carino, have called off their engagement after two years together. 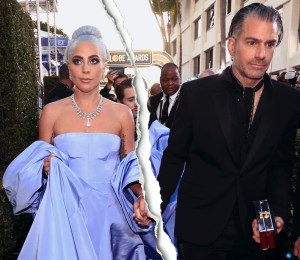 Just Jared confirmed the couple’s breakup on Tuesday, February 19. Rumors that the A Star Is Born actress, 32, and the talent agent, 49, had split first started swirling after she attended the 2019 Grammy Awards solo on February 10 and without her pink engagement ring on her left hand. The rock was also missing when she brought costar Bradley Cooper up on stage to perform “Shallow” during her Enigma residency in Las Vegas in late January, but it returned when she attended the Oscar nominees luncheon on February 4.

Carino was by the performer’s side as she won the best song award for “Shallow” from the Oscar-nominated flick at the 2019 Golden Globes. After the show, he posted a black-and-white picture of Gaga laying in bed, eating Fruity Pebbles while holding her trophy. “What a rager,” he captioned the intimate photo. The duo also attended the 2019 Critics’ Choice Awards together on January 13.

Us broke the news of the “Born This Way” singer’s relationship with her talent agent in February 2017 after they were spotted kissing ahead of her Super Bowl LI halftime show performance in Houston. In November 2017, Us confirmed that the duo had secretly gotten engaged months prior. Gaga confirmed their engagement nearly one year later when she referred to Carino as her “fiancé” at the 25th annual Elle Women in Hollywood event.

The Oscar nominee was previously engaged to Chicago Fire actor Taylor Kinney, whom she romanced for five years, before they called it quits in July 2016. Carino, meanwhile, was married to newscaster Brooke Baldwin, with whom he shares daughter Bella, from 1997 to 2015.