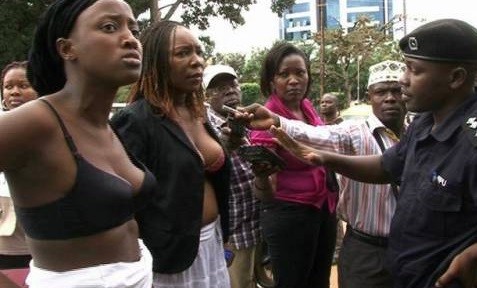 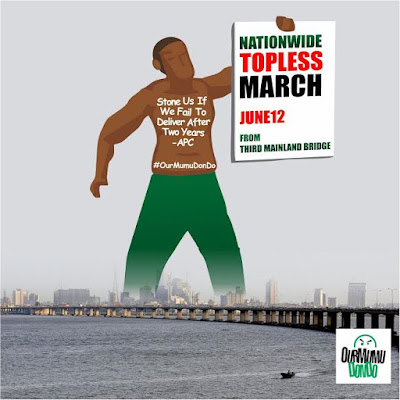 This is to inform all Angry, Vexed, Frustrated, and Genuinely Concerned Nigerians that on Monday, 12 June 2017, the OurMumuDonDo movement will hold a Nationwide Topless March to protest the despicable state of living of the common man and the indifference of political leaders to the quandary of the common man.
This protest will be hinged on a vociferous and vigorous demand for Fulfillment of Campaign Promises, Creation of Jobs for unemployed youths, and Increment in Minimum Wage for the proletariats.

The main March will hold in Lagos State and will start by 8:00 AM from the Third Mainland Bridge. Male participants at the protest are expected to appear topless with inscriptions of their most dreadful predicament as it relates to the three major demands for this mass action on their placards or chest. Female participants are not allowed to participate bare-chested but can participate by hoisting placards with inscriptions of their most dreadful predicament.

WHY A NATIONWIDE TOPLESS MARCH?

The quality of life of the Nigerian peoples has been demoted to a pitiable and decrepit state by criminal politicians and insatiable looters of the wealth of the common man. The shared humanity of the Nigerian peoples has been eternally ridiculed by national miscreants in positions of power. The thieving class in power has denied the Nigerian peoples of quality life through their endless plundering of national wealth. We know our silence has enabled corruption and impunity in governance but we will no longer sit and watch while our lives and future is looted by the sons and daughters of Jezebel in power.

Countless generations have passed and all promises by political scammers to better the lives of all suffering Nigerians have come to naught. We now know that the thieving politicians in power are the enemies of the common man. It has dawned on us that our future cannot be saved by the old men in power. We will no longer be deceived by the religious and tribal schisms of political monsters claiming to be leaders. The time to fight for the survival of the suffering man and woman in Nigeria has arrived. There shall be no going back because every suffering Nigerian must speak up this time.

This is a symbolic march; the first of its kind in Nigeria, one which will typify the current abysmal state of life of the common man; it is a march by the suffering peoples which will be completely owned by the suffering peoples. The era of sitting and doing nothing has passed. Before we all die of hunger, we will flood the streets and demand good governance. Before we all die in perpetual penury and discomfort impressed on us by the thieving and looting political oppressors, we will march to express our discomfort and fight against our common enemy.

We will fight because we must. We will not be deterred because our lives are no more secured. We will win because failure is not an option. Our goal is a country where quality life is assured for the common man.

We must collectively and defiantly say that enough is enough! Enough of the failed promises and oppressive rule. Enough of seeing the same faces with no changes. Enough of glorifying criminality and demonizing nationalism. The time to fight for the survival of the suffering man and woman in Nigeria has arrived. There shall be no going back because every suffering Nigerian must speak up this time.