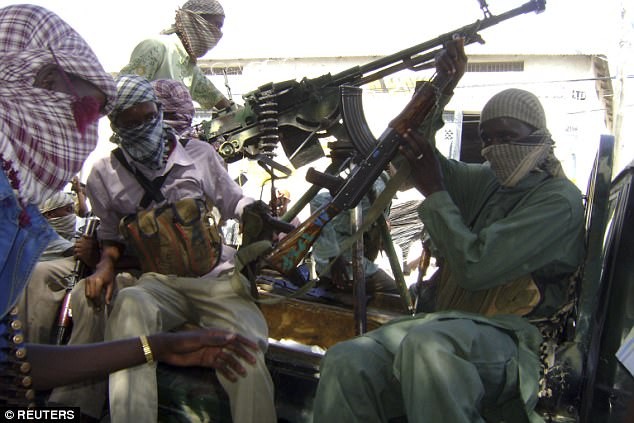 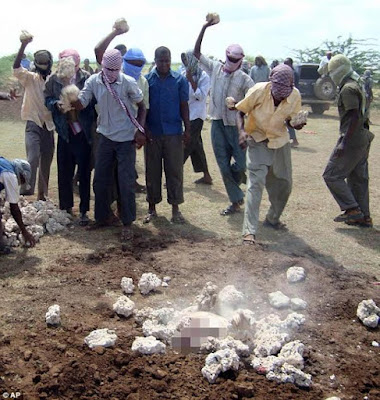 Al-Shabaab militants in Somalia buried a man neck-deep and stoned him to death allegedly for cheating on his two wives. Dayow Mohamed Hassan, 44, was killed in the southern village of Ramo Adey in front of hundreds of onlookers.

Moalim Geedow, the regional governor representing the al Qaeda-linked insurgency, said Hassan was buried in a hole then pelted with stones.

He said: ‘The man was married with two wives and children. He was publicly stoned to death today for committing adultery according to the Islamic sharia. The man had a third woman who was a divorcee. He did not have her according to sharia. He deceived her, saying that he went to a sheikh and that he married her.  However, when the woman got pregnant, the two families debated and there was no trace of valid matrimony. The court ruled he did not marry her legally and he was stoned to death.”

Since 2006, Al-Shabaab has been fighting a violent insurgency in Somalia to overthrow the government and impose its own strict interpretation of Islamic law. In recent years the terrorist group has lost control of many towns and cities to a 22,000-strong force of African Union peacekeepers. However, the group retains a presence in many villages and remains capable of launching deadly attacks.

This will not be the first time a man is being partially buried and then stoned to death for adultery by Islamist militants. In 2009, in the same Somalia, Mohamed Abukar Ibrahim, a 48-year-old, was buried in a hole up to his chest and pelted with rocks until he died in Afgoye, some 20 miles south-west of the capital of Mogadishu.