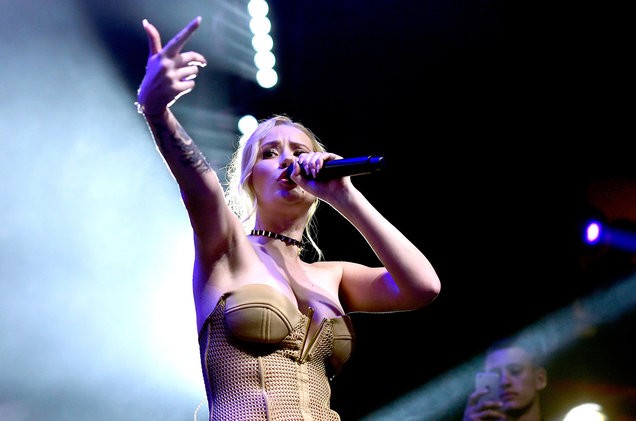 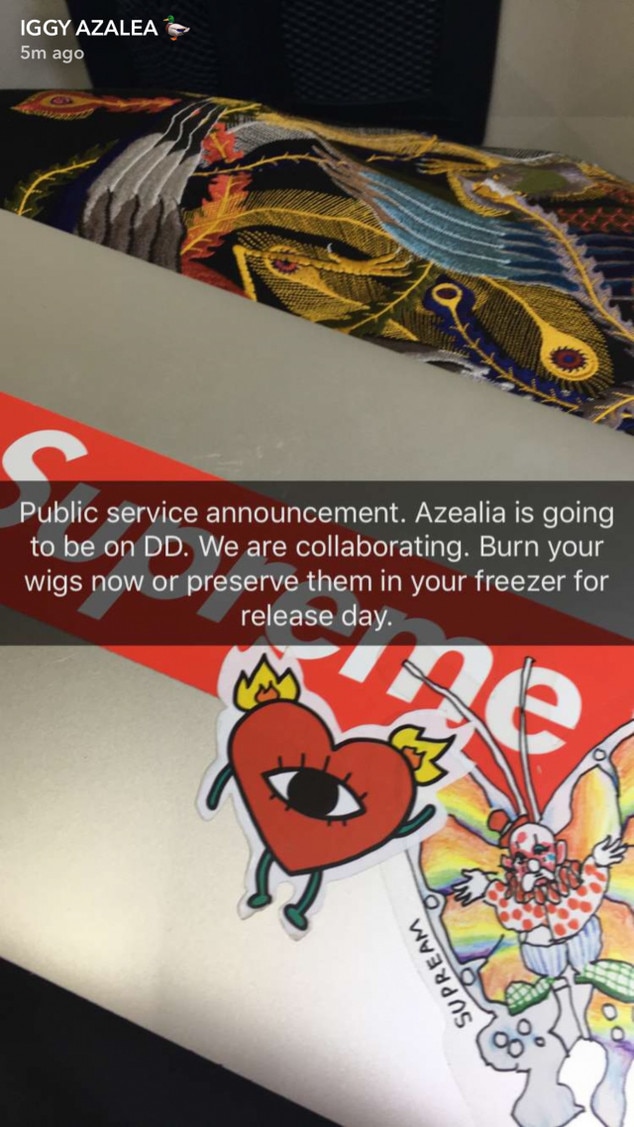 Are pigs flying? Because that’s how unlikely it is that Iggy Azalea would be collaborating with her arch enemy Azealia Banks—but that’s exactly what the “Fancy” rapper announced to her shocked (and enraged) fans on Snapchat earlier today. Cue the winged pork…

The 28-year-old revealed that the highly controversial rapper, whom she’s had a long and storied feud with, would be making an appearance on Iggy’s upcoming album Digital Distortion.

“Public service announcement. Azealia is going to be on DD. We are collaborating. Burn your wigs now or preserve them in your freezer for release day.”

Needless to say the Internet was not having it.

But what’s also interesting (other than the fact that everything is topsy turvy and we’re clearly living an alternate universe) is that in May, Iggy told the Zach Sang Show that the album would be released at the end of June. “I think it’s supposed to be June 30th or 31st,” said the pop star. Two things: June 31st is not an actual date that exists, and either way, the days have come and gone, it’s July and her album is still not here.

Clearly, the rapper has clearly been having some major issues with putting out her sophomore LP, which she first announced in 2015, but that’s nothing compared to the issues her fans are having with their fearless leader for teaming up with her fiercest critic.

If you cant understand my desire to turn YEARS worth of negativity into a positive interaction then thats your loss my dear. peace!

I dont expect you guys to understand why i would collaborate with someone who has publicly said they hope i die.

This has been something extremely negative for so long, if there is a way to make it positive and also be creative together, im here for it. 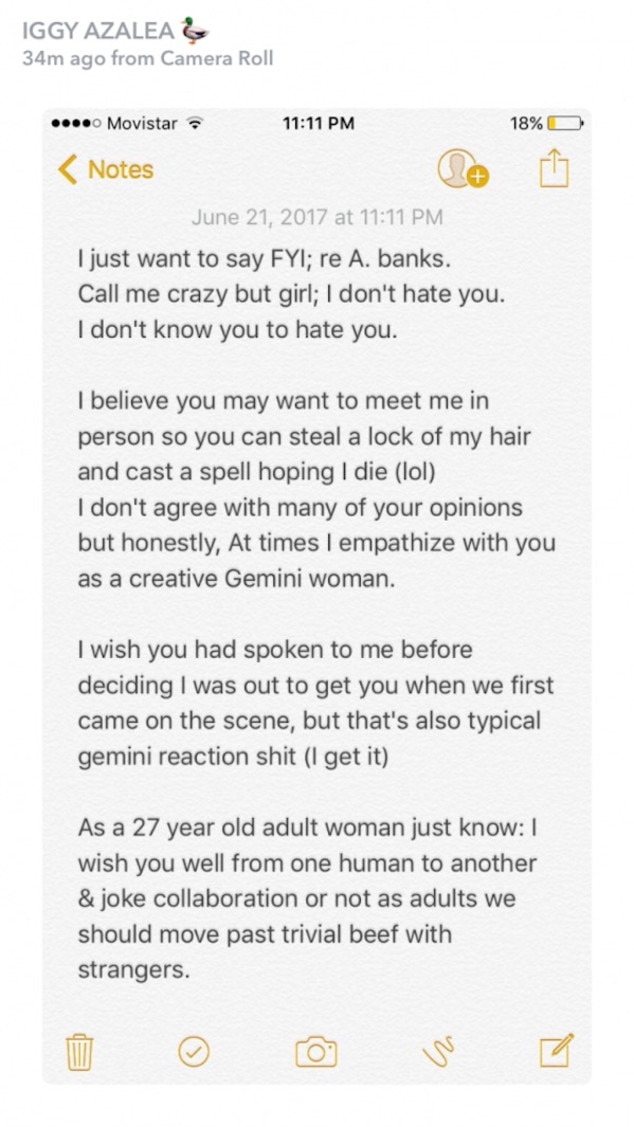 So how did this squashing of the beef come about?

Iggy posted a note on social media saying she wanted to get past all the hate: “I just want to say FYI; re A. Banks. Call me crazy but girl; I don’t hate you. I don’t know you to hate you.”

She continued, “I believe you may want to meet me in person so you can steal a lock of my hair and cast a spell hoping I die (lol) I don’t agree with many of your opinions but honestly, at times I empathize with you as a creative Gemini woman. I wish you had spoken to me before deciding I was out to get you when we first came on the scene, but that’s also typical Gemini reaction shit (I get it). As a 27 year old adult woman just know: I wish you well from one human to another and joke collaboration or not as adults we should move past trivial beef with strangers.”

In response to Iggy’s statement, Azealia spoke with XXL about her desire to have an open discussion with the pop star.

She told the mag,”I think a true reconciliation can happen once there is some acknowledgment of what hip-hop has been trying to tell her. I still don’t think she quite understands the effect her racial privilege and the socio-economic leverage that comes with it has on a marginalized group of women’s culture.”

Azealia said, “Race aside, this is also a women’s issue. I hope that there will be a chance for us to have an open discussion about this, as I feel America and the world could really benefit from some candid discourse between two public figures about the world’s biggest sickness: racism. I wish for women of the future to be able to refer to this moment in women’s culture as an example of what can happen when people take time to understand.”

Well it looks like these two were able to put their differences aside behind closed doors, but not everyone is so happy about this newfound friendship.

Many of Iggy’s loyal fans responded to her announcement today with outrage, but the performer tried to spin the collab in a positive light, writing, “If you cant understand my desire to turn YEARS worth of negativity into a positive interaction then that’s your loss my dear. peace!”

She added, “I don’t expect you guys to understand why i would collaborate with someone who has publicly said they hope I die.”

The Australian continued to defend her decision, “This has been something extremely negative for so long, if there is a way to make it positive and also be creative together, I’m here for it.”

So why so much hate for her sudden Azealia love?

The two had an explosive and racially charged Twitter feud in 2014 after Azealia dissed Iggy’s talents or lack thereof. The Australian went on the defense and took to social media, writing: “There are many black artists succeeding in all genres.” She added, “The reason you haven’t is because of your piss poor attitude…Your inability to be responsible for your own mistakes, bullying others, the inability to be humble or have self control. It’s YOU!”

“You created your own unfortunate situation by being a bigot and don’t have the mental capacity to realize yet,” Iggy added. “Probably never will.”

“Now! rant, Make it racial! make it political! Make it whatever,” Iggy continued, “but I guarantee it won’t make you likable & THATS why ur crying on the radio.”

“Enjoy continuing to bang your head against that metaphoric brick wall & Savor this attention. I’m the only way you get ANY,” she tweeted. “You’re poisonous and I feel genuinely sorry for you because it’s obvious at this point you are a MISERABLE, angry human being. Regards!”

Azealia fired back, tweeting, “Dear LordT (sic), I Pray for this Clueless White Girl…None of this will make sense to her until she herself has children with a black man and has to deal with having black children in America.”

“The interview was about things way beyond your mental capacity,” she wrote. “You have absolutely no place to comment.”

“Itchy Areola, you are so stupid and selfish to make any of this about yourself in particular,” said Azealia. “My tears had absolutely nothing to with you and everything to do with society and the media in general.”

Azealia then tweeted the rapper, calling her out by name: “@Iggyazalea do you know what a minstrel is? Because that’s what you are…..” She then posted a photo example of a white person wearing blackface on a variety show poster.