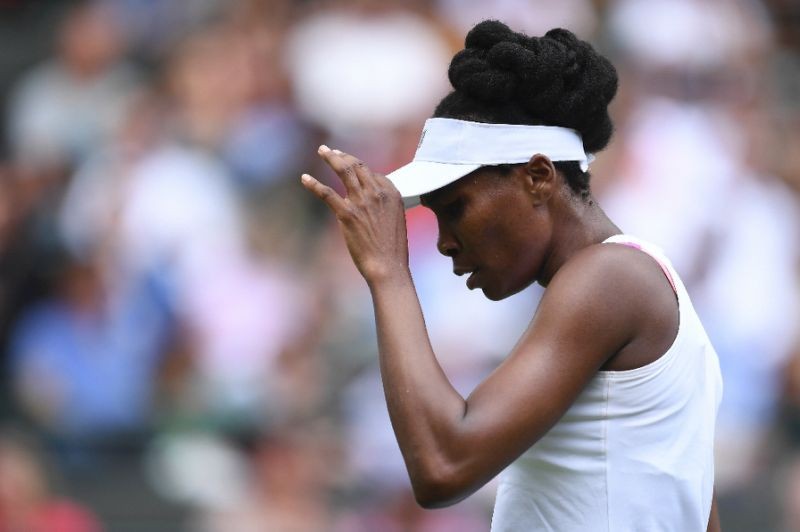 Venus Williams wept at Wimbledon over the “devastation” of a fatal road accident for which she is facing legal action as Andy Murray and Rafael Nadal eased into the second round on Monday.

World No 3 Stanislas Wawrinka was the opening day’s biggest casualty, losing to Russian debutant Daniil Medvedev while there were emotional comeback wins for Petra Kvitova and Victoria Azarenka.

Williams, the 37-year-old five-time champion, is celebrating the 20th anniversary of her maiden appearance at the All England Club.

But that landmark has been overshadowed by her involvement last month in a road accident near her Florida home which resulted in the death of a 78-year-old man.

“There are really no words to describe, like, how devastating and – yeah. I’m completely speechless. It’s just…” Williams said in a news conference before breaking down and leaving to compose herself.

The family of Jerome Barson, who suffered a fractured spine and numerous internal injuries in the smash, said they intend to sue the US star.

When she was asked how she was coping mentally, Williams added: “I have no idea what tomorrow will bring. That’s all I can say about it. That’s what I’ve learned.”

Despite the tragedy at home, Williams remained focused enough on Court One to clinch a 7-6 (9/7), 6-4 victory over Belgium’s Elise Mertens in the first round.

Defending men’s champion Murray celebrated the news that he is about to become a father again by reaching the second round.

The top seed and world No 1 downed Kazakh lucky loser Alexander Bublik 6-1, 6-4, 6-2, showing little sign of the hip problem which plagued him in the build-up.

“I have felt OK the last few days and the adrenaline you feel by playing a match numbs any pain you may have,” said the British star after seeing off world number 134 Bublik.

Murray next faces Dustin Brown, the man who knocked out Nadal two years ago.

World No 2 and two-time champion Nadal secured his 850th career victory with a 6-1, 6-3, 6-2 demolition of Australia’s John Millman.

Fresh from winning his 10th French Open title, Nadal goes on to face Donald Young for a place in the last 32.

“I haven’t had many matches on grass for the last few years, but I had some positive feelings,” said Nadal, who missed last year’s tournament with a wrist injury.

World number 49 Medvedev, making his Wimbledon debut, handed 33-year-old Wawrinka a sixth first round loss at the All England Club, although his efforts were hampered by a left knee injury which required an ice pack at the changeovers.

“I wasn’t feeling the way I wanted to feel. But I played against a great player who was confident,” said Wawrinka whose pain was eased slightly when girlfriend Donna Vekic won her opening match.

Medvedev, 21, kissed the Centre Court grass to celebrate his victory, his first at any Slam.

“A year ago I was ranked 250. If someone told me in one year I would win on Centre Court I would tell you you are joking,” said the wirey Russian.

Kvitova was playing just her eighth match since suffering a potentially career-ending hand injury fighting off a knife-wielding burglar at her home in December.

“I felt the energy from the crowd and it was amazing to be back here at Wimbledon and playing on the beautiful Centre Court,” the 27-year-old said.

Former world No 1 Azarenka defeated CiCi Bellis of the United States 3-6, 6-2, 6-1 in her first Grand Slam since taking time off after last year’s French Open to have her first child Leo in December.

The two-time Australian Open champion made the semifinals at the All England Club in 2011 and 2012.

“I understand that I need to be patient but the competitor in me wants everything quick,” admitted Azarenka.

Nick Kyrgios, who beat Nadal at Wimbledon in 2014, will not get another opportunity to repeat that shock.

The combustible 20th seeded Australian was 6-3, 6-4 down to France’s Pierre-Hugues Herbert when he called it quits after failing to shake off the hip injury which has plagued him in recent weeks.