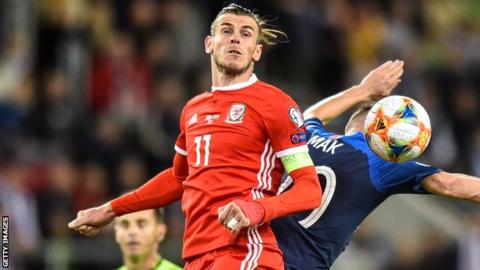 The Real Madrid winger, 30, was booked in Thursday’s 1-1 draw in Slovakia and could have received a second yellow card for a late foul on Milan Skriniar.

Bale admits he was “happy to get away with that one” and hopes fortune is now starting to turn Wales’ way.

“We’ve had some great results against big teams at home,” he said.

“We believe in ourselves. We feel no matter who we come up against we can come up with a plan to beat them.

“We have great players and a great team, and if we put in a performance we can beat anybody.”

Although Kieffer Moore’s first international goal put Wales ahead in Slovakia, Ryan Giggs’ side were unable to hold on to their lead as the hosts fought back to take a point and stay second in the group.

Wales are fourth but have played a game fewer than the top three and still have their fate in their own hands.

Even if they lose to leaders Croatia on Sunday (19:45 BST), they will qualify if they win their final two games – in Azerbaijan and at home to Hungary – providing Croatia beat Slovakia on 16 November, the same day as Wales face Azerbaijan.

That is because if the teams finish level on points, Wales would finish above Slovakia because of their superior head-to-head record.

A win over Croatia at Cardiff City Stadium would make the permutations even more favourable for Wales, but Bale says Sunday’s opponents are worthy group leaders.

“Croatia are the favourites,” he said. “They are one of the best teams in the world – especially after their World Cup performance.

“But being underdogs doesn’t change anything. We will always try and set up to win the game.

“We haven’t been looking at the table too much, to be honest. We all know if we win all three remaining games we should qualify and that’s our mindset, that’s our ultimate aim.

“We want to get to another major tournament and give it another go.”

Happy to be involved but feeling happier

Having already been booked for a tackle from behind on Stanislav Lobotka, Bale admits he could have received a second yellow in Slovakia. He will have to be careful against Croatia because another booking would rule him out of Wales’ penultimate qualifier in Azerbaijan.

He suffered a knock in making the challenge on Inter Milan defender Skriniar, but he insists he is “fit and fine” for Croatia.

“It was just a knock on the knee and a bit of ice has sorted that out,” said Bale.

“I was more worried about getting sent off, to be honest. I was happy to get away with that one, though I didn’t think the first one was a yellow card, so it evened itself out.

“I can’t make too many silly tackles [against Croatia], I have to be mindful of that. I don’t want to miss any games, especially at crunch time in the group.

“I have to be clever with what I am doing and maybe expect someone to try and rile me up to get me suspended.

“But I am experienced enough to get through without a booking.”

After a frustrating summer where his Real Madrid future was the subject of constant speculation, Bale says he is happier and healthier than he was when Wales were beaten 2-1 in Osijek in June in the reverse fixture.

“I’m in a better place physically more than anything than I was in the summer, because leading into the game I hadn’t played for five or six weeks, wasn’t too fit and wasn’t too happy,” he said.

Time to get one over on Modric

Bale is keen to finally get a win over his Real Madrid team-mate and opposition captain Luka Modric.

Modric, who won the 2018 Ballon d’Or – becoming the first player other than Lionel Messi or Cristiano Ronaldo to claim the award in more than a decade – was also a team-mate of Bale’s at their previous club Tottenham Hotspur.

Bale has been on the losing side three times against Croatia since 2012, with the World Cup finalists winning the past two fixtures 2-1.

“Whenever we play them we always seem to lose by one goal, and it is always quite a tight game,” he said.

“Having played together for a long time at Tottenham and Real Madrid, we know each other well and it would be nice to get one over him finally.”