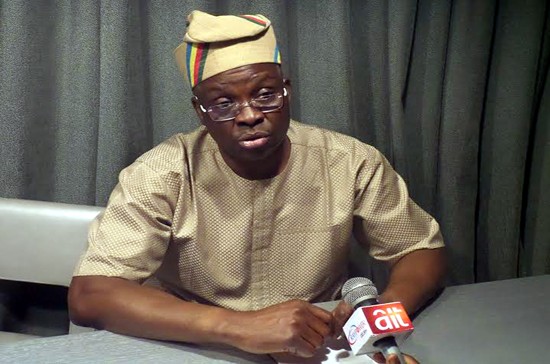 Kamarudeen Ogundele, Ado Ekiti
The Ekiti State Chapter of Afenifere, a pan-Yoruba social, political and cultural organisation, has called for prayers for relief in the ongoing fuel crisis that has paralysed economic activities in the state.
The group also advised Governor Ayodele Fayose to find a solution to the problems affecting the state rather than taking delight in launching verbal attacks on President Muhammadu Buhari.
The group, on Wednesday, in a press statement signed by its Chairman, Elder Yemi Alade and Publicity Secretary, Chief Biodun Akin-Fasae, said the fuel scarcity unleashed on the residents was avoidable if dialogue had been embraced by the governor and the petrol marketers to resolve their disagreement.
The state government recently demolished some petrol stations still under construction near residential and school premises, saying they posed threats to lives and properties.
The government had also demanded the filling stations’ owners to provide evidence of full insurance for their premises and staff.
This led to a face-off between the governor and petrol dealers in the state. The government further sued the Nigerian Union of Petrol and Natural Gas Workers, Petrol Tanker Drivers, Petrol Dealers Association of Nigeria, and six of their members.
Angered by the development, the national leadership of the unions cut-off supply of petroleum to Ekiti.
In the statement titled: “God, Heal Our Land”, the Afenifere said, “Currently the economic activities of the state has run ‘berserk’  due to executive misapplication of strategic management of human and business relationship. Now, no one is sure of what happens next because of the misunderstanding between government and fuel marketers which has now degenerated into chaos.
“And this has been going on for two full weeks now and unfortunately, the government is feeling comfortable and justifying its strategy by pulling down several of the fuel stations for a flimsy excuse which not a few have interpreted as a mere political vendetta and a mere braggadocio on the part of the government.
“Our suggestion is that impunity to destroy the economic livelihood of people should stop because we believe that no fuel marketer approved for himself the construction of any filling station. Government did. And if the government would now change its mind, then a process of discussion and negotiation should be put in place rather than just breaking of the extant laws.”
Also speaking, a chieftain of the All Progressives Congress in Ekiti state, Isola Fapohunda, has appealed to the marketers to reopen their stations, noting that this would be in the best interest of the Ekiti people.
He also urged youths not to allow desperate politicians to use them in perpetrating violence that only themselves and their families will benefit from while they turned them against one another.
Fapohunda, who is a governorship aspirant, lamented the ongoing war between the state government and petrol marketers in the state, which had led to a cut-off of fuel supply to the state in the last two weeks.
He said, “The fact that Ekiti people have suffered needlessly as a result of the scarcity, a situation which has tolled heavily on various businesses and lives, a situation that has even caused our dear state national embarrassment, particularly during the burial of our dear late father of the state and national icon (Late General Adebayo).
“I want to appeal to the marketers to sheath their swords and call off the strike in the best interest of Ekiti people.
“Hospitals cannot run properly and patients might be dying. Students and public servants cannot access their schools and work places on time.”
Share
Facebook
Twitter
WhatsApp
Pinterest
Linkedin
ReddIt
Email
Print
Tumblr
Telegram
Mix
VK
Digg
LINE
Viber
Naver
Previous articleNadal, Djokovic advance; Tsonga out
Next articleLauren Conrad Bares Baby Bump in Bikini and Launches First Swimwear Line