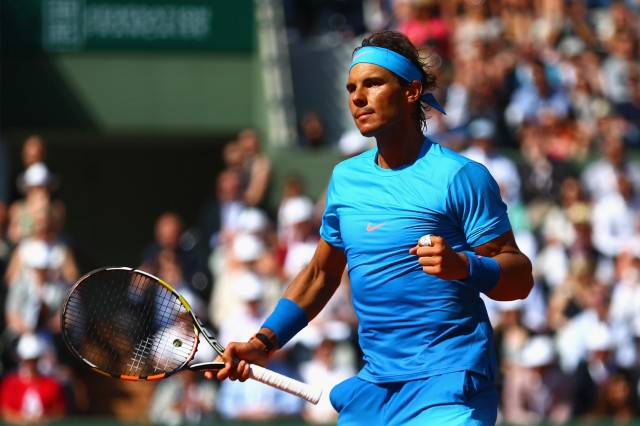 Rafael Nadal stormed into the last 32 at the French Open on Wednesday.

Nadal outclassed Dutchman Robin Haase 6-1, 6-4, 6-3 in one hour and 49 minutes on Court Philippe Chatrier to continue his quest for an incredible 10th Roland Garros triumph.

“I was more or less under control during the whole match, so I’m very happy. Winning in straight sets is always good news,” said Nadal.

“I think I did a lot of things well this afternoon.”

The Spaniard will face Nikoloz Basilashvili for a place in round four after the Georgian matched his best ever run at a Grand Slam.

DJOKOVIC ROMPS INTO SECOND ROUND

He may be carrying a little more around the middle than in his Roland Garros pomp, but the star appeal of Andre Agassi was undeniable as his new charge Novak Djokovic romped to a second-round win.

Reigning champion Djokovic teamed up with 1999 champion Agassi in a dream-team player-coach combination just before the start of the tournament.

Already the signs were good on Court Suzanne Lenglen. There was a spring in the step of the world number two that had seemed missing in recent months.

“Well, that’s what these ‘Super-coaches’ give you,” former world number one and triple French champion Mats Wilander told Reuters.

Djokovic looked every bit a champion as he controlled his opponent throughout, with Agassi closely monitoring from courtside, a look of concern occasionally clouding his mien.

But Agassi needn’t have worried. Having raced through the first set in a little over half an hour, second seed Djokovic established his rhythm and then just pulled away.

He next meets Argentine Diego Schwartzman in the third round.

Jo-Wilfried Tsonga’s French Open hopes vanished into thin air when he was sent packing in the first round with a 7-5 6-4 6-7(6) 6-4 defeat against Argenitine Renzo Olivo.

The French 12th seed, who had just won the Lyon Open on clay, bowed out after saving three match points in the only game played on Wednesday after the match was interrupted by dusk on Tuesday.

“We were back to the hotel around 1 a.m., I had a massage, it was not easy to sleep. I knew the first point today was important,” world No 91 Olivo, who trained in France from 2012-2016, said courtside in French.

Olivo served for the match on Wednesday but a burly Tsonga had broken back to keep his hopes alive.

“I just tried to play every point as it was the last,” said Olivo, who handed Tsonga his second first-round defeat at Roland Garros.

No French man has won the French Open since 1983, let alone a grand slam title.

Facing a player competing in his first tour-level event since undergoing knee surgery last June and languishing at 470 in the rankings, the sixth seed came off second-best in the early baseline exchanges.

Taking the ball early, Bolelli hurried Thiem into mistiming his trademark booming groundstrokes as the Austrian – an outside bet for title and the only player to have beaten Rafa Nadal on clay this year – sent a succession of crosscourt backhands wide.

The Italian saved three break points in the ninth game before surrendering his serve two games later. That left Thiem, who recorded his best grand slam showing in reaching last year’s semi-final, to serve out the first set.

“The first set was very close, and it was one key of the match today that I won it,” the 23-year-old Austrian said courtside.

The Italian faded in the second set, when he had a medical timeout for work on muscles around his rebuilt knee, and Thiem finished off the match in just under two and a half hours with an ace to progress to the third round.