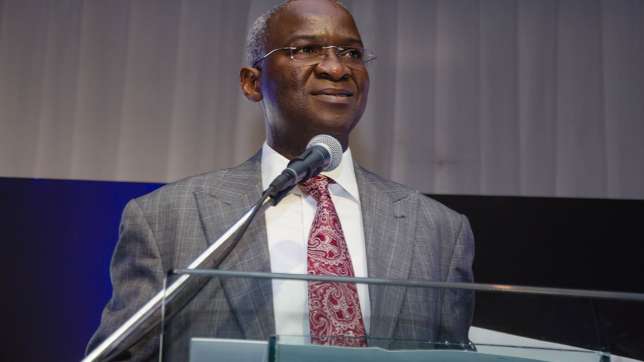 The minister said that the Federal Government had secured the World Bank approval for $486m Transmission Company of Nigeria transmission expansion funding.

The Minister of Power, Works and Housing, Mr Babatunde Fashola said that the Federal was making efforts to ensure steady power supply in the country.

Fashola said this at the 25th Monthly Power Sector meeting on Monday in Uyo.

The minister said that the Federal Government had secured the World Bank approval for $486m Transmission Company of Nigeria transmission expansion funding.

“Progress is being made with the same bank for the Rural Electrification and Distribution Expansion Funding.

“Clearly, our implemental power initiative is well underway, some jobs are manifesting and the promise of steady power is real.

“If we persevere, I am certain that we will witness uninterrupted power, which is the final destination of our journey.’’

The minister said that the Power Sector Recovery Programme (PSRP), policies, actions and programmes in the sector were meant to solve the power sector problems.

He said that the policies, programmes and actions were delivering results.

“One of the results is the regulation that will democratise access to meters for power sector customers.

“We have reached a 7,000 Megawatts (MW) Generation Capacity and have a 5,000 MW Distribution Capacity, what is newsworthy is that in the last month, we have met with Manufacturers Association of Nigeria (MAN), DisCos, and GenCos.

“On how to implement the Eligible Customer Policy and increase connectivity to the 2,000 MW that is available.

“In many parts of the country connected to the grid, citizens’ feedback is positive, even though all the problems are not solved.

He, however, described solar energy as cleaner and more efficient source of power, emphasising that in many states, solar power is being accepted and used.

The minister said consumers were already embracing the solar power generation plan, an initiative of the government to boost electricity.

Fashola said that the country was moving away from theorising power to actual provision of efficient power to support trade and business, especially Small and Medium Enterprises (SMEs).

The minister also inaugurated the Meter Asset Provider Regulation 2018, and presented a copy of the regulation to Gov. Udom Emmanuel of Akwa Ibom.

Emmanuel said the metering company in the state would solve the four million meters need of the country.

The governor, however, called on the Federal Government to take advantage of the metering company existing in the state.

He warned against vandalism of power installations, adding that the state government would wage a war on vandals to protect the infrastructure in the sector.

“The major cardinal point when we did our five-point agenda that anchored on industrialisation is also the drive that we are doing on electricity generation and distribution.’’

The governor commended Fashola for his drive and efforts in solving the power problem in the country.

“If the effort is sustained, the country is close to solving its power problems,’’ he said.