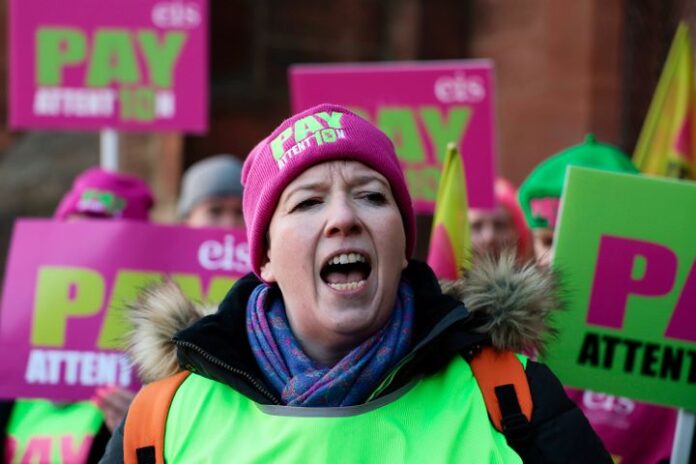 It means more than 250,000 teachers in England and Wales who are members of the National Education Union (NEU) will stage the profession’s largest-ever walkout in a dispute over pay.

Turnout was more than 50% — the threshold required by law — with “almost all” teachers voting for strike action in a ballot of 300,000 staff.

Around 24,000 schools and education centers could be forced to close on February 1 — when 100,000 civil servants at the Public and Commercial Services (PCS) union will also be on strike.

It promises to be the biggest day of disruption so far in the current wave of industrial unrest that has also seen nurses, ambulance staff, postal workers, and rail workers protest over pay and working conditions.

The support staff will not join in the strike action in England after the union failed to meet the 50% turnout threshold.

A source close to the NEU executive told HuffPost UK: “This is a result that will hopefully send shockwaves through the government, which simply didn’t believe it was possible for us to do this.

“It will be more damaging than many other industrial actions. Most kids will be at home for the day, meaning parents will need childcare.

“This result was only possible due to our strategy, planning, and smart use of technology and data.”

The NEU’s ballot called for a “fully funded, above-inflation pay rise” to compensate staff for a decade of eroded wages. Research by the union estimates that its members have lost a minimum of £64,350 in earnings since 2010.

The government has upped its offer of a pay rise to 5% for most teachers in England and Wales this year while offering those who are newly qualified an 8.9% increase to meet the commitment to increase starting salaries to £30,000 by 2023.

However, the teaching unions argue that the pay offers amount to a real-term pay cut given that the rate of inflation stands at 10.7%.

The NEU’s result will create a further headache for the government, which is struggling to put an end to mass strikes in the public sector.

This month alone will see strikes by ambulance workers, nurses, Abellio bus drivers, and physiotherapists, as well as teachers in Scotland.

The Royal College of Nursing (RCN), whose members will strike on Wednesday and Thursday this week, have warned that they will ask double the number of nurses to walk out in a bid to increase pressure on the government.

In a sign that the government’s stance could be softening as the industrial unrest intensifies, Unison said the health secretary, Steve Barclay, told the health unions that he was seeking a high pay offer for NHS workers from the Treasury.

Ministers are also talking positively about reaching a deal to end rail strikes. Transport secretary Mark Harper confirmed at the weekend that he had given the train operating companies “permission” to make a new offer to the unions.

The planned combined action by teachers and civil servants on February 1 aims to recreate the industrial unrest of 2011, which saw two million workers go on strike over the government’s changes to public sector pensions.

A brief moment of respite for the government came at the end of last week when it was confirmed that a strike ballot organized by the National Association of Schoolmasters Union of Women Teachers (NASUWT) failed to owe to poor turnout.

Under the Trade Action Act of 2016, unions deemed to provide a “public service” must reach a turnout threshold of 50%. There is an additional requirement to ensure that 40% of those who are eligible to vote then back strike action.

NASUWT said that while nine in 10 of their members voted to strike over pay, the government’s “anti-trade union legislation has prevented members in state-funded schools and colleges from taking industrial action”.

The NEU also uses a central data system called Communicator which collects information from representatives and its organizing platform Activate. The data platform shows every interaction the union has had with its members, allowing it to identify target voters.

A Department for Education spokesperson said: “We have been clear that strike action is not responsible, and so are pleased that the majority of NASUWT members did not vote to walk out.

“After two years of disrupted education for young people, families will be relieved that these teachers did not choose to strike.

“The education secretary will have further meetings with union leaders to avoid harmful strike action.

“We have already met the unions’ request for a further £2 billion for schools both next year and the year after in the autumn statement and awarded teachers with the highest pay award in 30 years.”