Does The Mayor Of Oklahoma City Provide A Post- #Trump Road Map For Republicans? 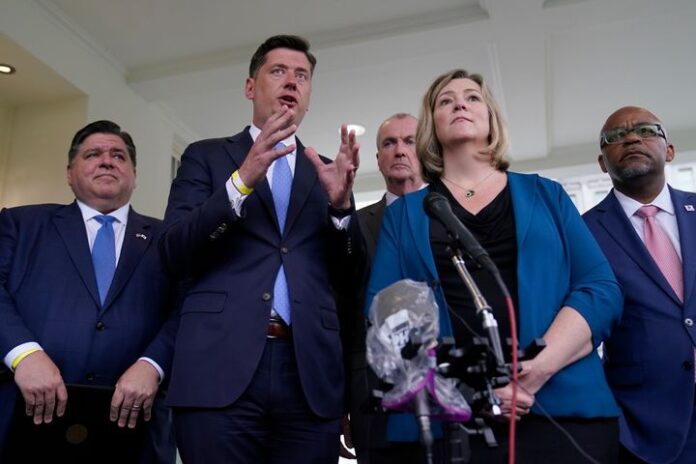 OKLAHOMA CITY — Many politicians have iconic moments that remain associated with them throughout their careers. Not many of those are literal mic drops, though.

In September 2019, as part of an opening concert for Oklahoma City’s new centerpiece Scissortail Park, Mayor David Holt, in jeans and an untucked shirt, led a crowd of 26,000 in a raucous chant of “OKC! OKC! OKC!”

Then he turned, casually dropped the microphone on the stage, and walked offstage with the swagger of a rock star. When the concert series resumed in 2021, local news speculated whether “Mayor Mic Drop” would do it again.

A mic drop is not the most conventional politician move, much less for one from a place like Oklahoma, but it’s not the only thing a bit distinctive about the lanky 43-year-old Holt. Aside from being Republican, he bucks almost all of the requirements needed to be popular in a state where Donald Trump won all 77 counties. Twice.

But he has also touted the need for city support for a new sports arena, eliminated a slew of municipal occupational licensing requirements, and, while in the state legislature, proposed phasing out the state income tax.

During his first mayoral term, he even touched the third rail of conservative politics — taxes — by successfully campaigning to extend a city sales tax, raising $1.1 billion to pay for projects like a homeless shelter, a domestic violence center, and a small multipurpose stadium.

And yet he was reelected with almost 60% of the vote in the mayoral election in February, beating two far more conservative opponents, including one from old Oklahoma City money who touted her love of Trump.

As the Republican Party nationally continues to digest what lessons, if any, it learned from the midterms, there will likely be a faction arguing Trump and his style of politics are no longer effective and that winning back the battleground suburbs will require a new, less angry approach.

Holt, with his business-friendly but socially moderate stances, would fit that bill. While he is, for now, swearing off any talk of being anything other than Oklahoma City’s public face, Holt may have found a formula for cracking the purpling suburbs, of which Oklahoma City is a prime example. But whether his prescription can be replicated elsewhere or be given a chance to work on a bigger stage depends on the GOP’s Trump fever breaking.

He projects the fresh-faced earnestness of former South Bend, Indiana, Mayor Pete Buttigieg or early Paul Ryan, minus the harsh “makers versus takers” rhetoric. Instead, his political guide star seems to be the deep belief that there’s a midpoint in every dispute, if only there’s enough will to find it.

“When you want absolute success and absolute dominance of your worldview, that is impossible,” Holt told HuffPost. “So you get frustrated, and you get disappointed and you begin to lash out at the process. And in this case, it’s democracy.”

Oklahoma City is a big city, both in size and population. At 620 square miles, it’s in the top 10 U.S. cities by area. The 687,725 residents made it the 20th largest city in 2021, although its overall metro area population of 1.4 million puts it further down the list.

And where once it vied with Tulsa to be the state’s highest-profile city, its growth in recent years has outstripped its rival, allowing city boosters to raise their ambitions from being a poor man’s Dallas to being a big-league city.

The arrival of the NBA’s Thunder in 2008 was the culmination of years of efforts at downtown revitalization, much of it paid for by a “temporary” one-cent sales tax approved by voters in 1993 and renewed for a third time under Holt, with more than 70% of Oklahoma City voters on board.

In turn, that revival has made Oklahoma City a more competitive choice for young professionals among Midwestern cities. The Kansas City Fed in March said Oklahoma had a net in-migration of college graduates in 2020 for the first time since 2012. It also saw an increase in college graduates moving in who were under 25.

“When you want absolute success and absolute dominance of your worldview, that actually is impossible.”

That evolution helped make Oklahoma County the closest thing to a blue county in Oklahoma. It provided the biggest margins of any county in a 2020 vote to expand Medicaid and in the 2022 governor’s race for a moderate Democratic candidate.

In 2018, it provided one of the biggest upsets of the congressional midterms, as Democrat Kendra Horn defeated a Republican incumbent in a district that at the time was made up of most of Oklahoma City and its northern suburb of Edmond. (Oklahoma Republicans redrew the district to split Oklahoma City and added a swath of rural Lincoln County for this year’s midterms.)

Holt points out that while Oklahoma remains deep red politically, Trump carried Oklahoma County, which includes much of the city that stretches into four counties, by only a single percentage point.

“It’s not blue, yeah. But it certainly is purple,” Holt said. The county’s voter registration bears that out. While Republicans outnumber Democrats by a 42% to 36% margin, the fastest-growing group in the last four years has been independents.

Holt is proudly Republican. Oklahoma City has a nonpartisan council-manager form of city government where the mayor is more of a civic cheerleader than the guy called to fix potholes, but that hasn’t kept Holt from advertising his party affiliation.

He was a GOP staffer on Capitol Hill in the early 2000s, then worked in George W. Bush’s White House on its legislative affairs team. He was a state senator for seven years. During the 2016 GOP presidential primary, he served as Marco Rubio’s state chair.

Even with that lineage, Holt finds himself out of step with many in the Republican Party who favor Trump’s all-or-nothing approach.

Instead, Holt said, people have to meet somewhere in the middle.

Many Democrats say he is a Republican they can work with.

Joshua Harris-Till, a Democrat who unsuccessfully ran for an Oklahoma City-area House seat in November and is also on a city policing reform board, said Holt’s a good listener. During the nationwide protests following the murder of George Floyd, the mayor asked if it would help if he met with the protesters — and did.

“That is the reason that Mayor Holt is so well-liked,” Harris-Till said. “He doesn’t understand everybody’s experience. He doesn’t come from a struggle in life and has a story that’s super relatable to everybody.

“But he has the willingness to listen and that makes him relatable to so many people.”

But how does a Republican mayor square a $1.1 billion extension of a sales tax — which would be described as a tax hike in most GOP circles — with being Republican?

“Republicans are for limited government, not no government,” he said. “First of all, you have to acknowledge government does do some things, and I believe that.”

Holt said he sees his reelection win as an endorsement of his anti-Trump stance. It’s not a position he intends to change soon.

“I am not going to run for any office that requires me to join a cult,” he said.

“I am not going to run for any office that requires me to join a cult.”

“So I’m going to represent the people’s best interests and focus on the issues that matter, and if that means that Trumpism and I will never align, then yes,” he added.

Pat McFerron, a Republican pollster and friend of Holt’s, joked that the mayor has decades to decide if he wants to try moving up the political ladder, given his age. But he said he didn’t think Holt would trim his anti-Trump sails to do so.

“I think he’s going to say, ‘If the Republican Party comes to me, that’s great.’” McFerron said.

Holt’s love of social media has led some to wonder if he’s more interested in promoting himself than the city. (A local blog dubbed him “Mayor McSelfie.”)

👀 I am excited to officially announce that Stonecloud Brewing Company is launching HOLT MY BEER, a new Mayoral Double IPA!

All proceeds will directly benefit Patrons of the OKC Animal Shelter. pic.twitter.com/5LPRGOrpSu

McFerron noted that Holt “has a joyful exuberance about being mayor of Oklahoma City,” which can come across as being a bit cringe-inducing at times.

“But it’s authentic,” McFerron said. “It’s who he is. And people embrace it.”

‘A Strategic Reason’ To Move On

November’s elections did little to move the needle on Holt’s future and see if his brand could succeed statewide. Nationally, Republicans underperformed historical midterm patterns, but in Oklahoma, Trump-supporting governor Kevin Stitt was reelected handily.

Holt and Stitt clashed over the initial handling of the pandemic, with Stitt urging an early lockdown end that Holt only grudgingly went along with. But that fight underscored what an ideological rarity Holt would be if he ran for higher office in the state as someone who refuses to say Trump won. With no Senate or governor’s elections until 2026, the issue may be moot.

Holt said if Republicans nominate Trump for president again, it will confirm the party is still a “cult of personality.” But with a third straight lackluster performance with Trump as the party’s leader, he said Republicans should move on.

“I thought it was time to move on from Trump since 2015,” the mayor said. “I think that my belief was more moral over the last several years, but now you have a strategic reason to move on.”

Holt said his “good enough” brand of compromise politics only seems rare now, in a polarized era, but would be less so if the state party primaries were changed to allow more moderates to compete. He cited California and Alaska, states where the top vote-getters, regardless of party, advance to the runoff.

Asked if it’s unrealistic to hope states change their elections, Holt said, “Why can’t it be changed? It was changed in California 10 years ago.” In states where the petition process exists, he said, voters could make the change instead of waiting for their state legislators.

Until then, though, Holt said he’s happy to be mayor of his hometown.

“Conveniently, Trumpism has arrived for me at a time when I am doing other things,” he joked. But he also left the door slightly ajar if, as he expects, the political environment changed.

“I think I have the best of all worlds — a lot of fun things to do in the near term and always the hope that you know, I’ll have new adventures in the future.”