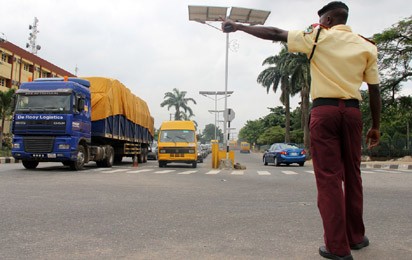 By Olasunkanmi Akoni
A special crack team of the Lagos State Traffic Management Authority, LASTMA, has arrested eight of its officers over alleged collection of bribe from motorists, as well as other corrupt practices. The agency, recently, dismissed 20 officials for various corrupt practices and 15 others received letters of warning for various acts considered inimical to the agency and service of the Lagos State Government.

The eight officers attached to Agege-Pen Cinema Office of the agency, were arrested last week,

According to report, the duo of Adeshina and Davies had earlier arrested two Lagos painted commercial buses with registration numbers FKJ 770 XT and KRD 558 XM driven by one Olatunji and Eze, respectively at Abule Egba area of the State for seat belt violation.

The actions of the drivers were in violations of the Lagos State Traffic laws, and the buses were subsequently, impounded and taken to the Agege-Pen Cinema Office of the agency for appropriate action.

It was gathered that the matter took a new twist at the Agege office when officers who impounded the vehicle in conjunction with the General Duty Officer, allegedly, demanded for the sum of N7,200 bribe each from the bus drivers before the release of the buses.

The drivers, who later yielded to the officers’ demand by paying the amount with marked money, later alerted the headquarters of the agency

However, in a successful sting operation, organized and coordinated by the Provost Marshal of the agency, Mr Femi Ajibosho, the officers were later apprehended.

The Provost Marshal arrived when Abolade was about collecting N7,200 from Eze, while the collected marked money of N7,200 of Olatunji was found on the officer after a thorough search.

In the same vein and at the same location, the members of the patrol team of the Agency comprising of same indicted officers also arrested a vehicle for traffic laws violation and asked Abolade to facilitate collection of bribe on their behalf from the alleged offender before the release of the vehicle.

Confirming the incident, at Oshodi Office of the Agency, LASTMA General Manager, Mr Olawale Musa, said the Agency has set a standard for itself to become one of the most disciplined, credible and efficient traffic management institution in the Sub-Saharan Africa.

He disclosed that all the officers involved in the shameful act had been released on bail, but would be made to face the Lagos State Public Service Rules and Regulations for disciplinary action accordingly.

He said: “LASTMA under my watch will not tolerate any act of indiscipline and corruption capable of dragging the revered image of the Agency and that of the State Government to the mud.

“To this end, all the officials involved in the shameful act will be made to appear before the Personnel Management Board (Discipline) to defend their action in accordance with the relevant sections of the Public Service Rules.”

Musa described the action of the officers as “disgraceful” and not a reflection of the training and operational manual of the agency, adding that it also did not justify the huge motivation and investment in them by the agency to perform excellently on the road.

However, he said the new paradigm shift which is now responsible for sanity, orderliness and seamless traffic on Lagos roads does not preclude the agency from sanctioning any motorist who violates the law when occasion calls for it, in order to improve on the existing tempo and performance.