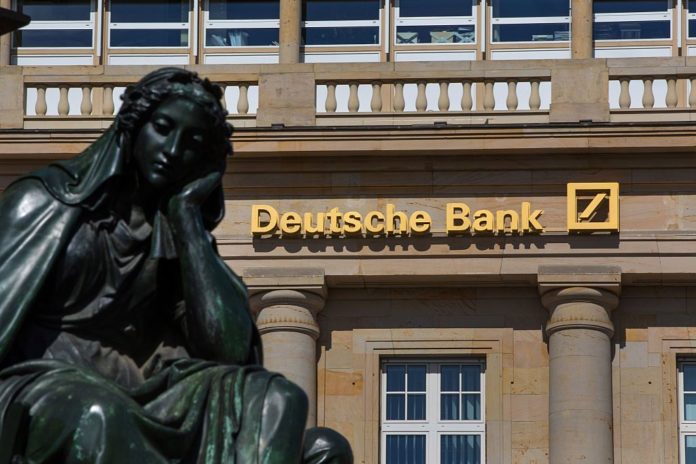 A signs stands above the entrance to a Deutsche Bank AG bank branch in Frankfurt, Germany, on Monday, July 4, 2016.

Deutsche Bank executives can expect an explosive meeting with shareholders Thursday, as the bank’s tumbling share price and growing backlog of scandals place the board firmly in the firing line.

The embattled German lender saw its share price hit a record low Monday, down nearly 5% since the start of the year, after UBS downgraded its stock to a “sell” rating from “neutral” and cut its target price from 7.80 euros ($7.45) to 5.70 euros. Shares were down a further 1.6% during Wednesday afternoon trade.

Reports this week suggested substantial shareholders will push for the removal of Deutsche Chairman Paul Achleitner ahead of his term expiry in 2022. However, CNBC sources said Tuesday that the bank expects Achleitner to retain his premiership with around 60% shareholder approval.

Deutsche also faces pressure to trim its investment banking division following the collapse of merger talks with domestic rival Commerzbank. Investment banking (IB) is the specific division relating to the creation of capital for other companies, governments or entities.

The UBS downgrade note highlighted that Deutsche’s IB would have been a “key beneficiary” of the deal with Commerzbank, helping reduce funding costs and spreads, and balance the overall profile.

Influential shareholder proxy Institutional Shareholder Services (ISS) has advised its members to vote against “discharging” Deutsche’s board, the vote of confidence under the German corporate code. It claimed that shareholders had borne the brunt of monetary and reputational damage inflicted by a series of scandals, principally resulting from the bank’s failure to uphold anti-money laundering (AML) controls.

Deutsche has been the source of much negative publicity in recent years — from settlements with the U.S. Department of Justice, to management reshuffles, weak earnings, constant restructuring, merger speculation and steep stock price falls.

The bank defended its risk and control system on the grounds that it had “significantly improved” over the last three years, but the reputational cloud hanging over the bank has only darkened in recent weeks after reports that it prevented the flagging of suspicious transactions involving entities linked to President Donald Trump and son-in-law Jared Kushner.

The latest scandal to engulf Deutsche Bank came after a New York Times report alleged Deutsche Bank senior management ignored reports from employees about transactions in 2016 and 2017 which triggered its automated controls against illicit activity.

The transactions allegedly related to entities controlled by Trump and Kushner, but the bank staunchly denied the report, saying in a statement that the “suggestion that anyone was reassigned or fired in an effort to quash concerns relating to any client is categorically false.”

The president’s relationship with Deutsche Bank has long been a source of scrutiny. Trump sued the bank last month to block its compliance with congressional subpoenas seeking access to his financial records.

U.S. President Donald Trump walks toward journalists as he departs the White House for a campaign rally in Pennsylvania May 20, 2019 in Washington, DC.

A federal judge in New York City on Wednesday said Deutsche Bank can turn over financial documents related to President Donald Trump and his businesses in response to subpoenas from two Democrat-led House committees.

Judge Edgardo Ramos’ ruling came after a hearing at which lawyers for Trump, his three older children, Donald Jr. Eric and Ivanka, and the Trump Organization argued that the subpoenas to the two banks should be quashed. An appeal of the decision is all but certain.

Deutsche Bank been a consistent principal lender for Trump’s real estate dealings, the president tweeting angry retorts Monday to suggestions that other banks refused to work with him due to a lack of creditworthiness, by claiming that he “didn’t need money.”

Last month, a confidential internal memo published by The Guardian revealed Deutsche Bank could face legal action over the massive Global Laundromat scheme, used by Russian criminals with ties to the Kremlin and KGB to move money into the western financial system between 2010 and 2014. A spokesman told CNBC the bank “remains committed to providing appropriate information to all authorized investigations.”

In November 2018, the bank’s Frankfurt offices were raided by German police, prosecutors and tax inspectors in a money-laundering probe stemming from the Panama Papers scandal. Deutsche bosses attributed its fourth-quarter loss in part to the ensuing negative publicity.

In 2017, the bank was hit with a $630 million fine by U.S. and U.K. regulators over allegations of Russian money-laundering between 2011 and 2015. Regulators said Deutsche’s anti-money laundering control mechanisms failed to spot sham trades with a value of up to $10 billion, as they were unable to identify the customers involved in trades and the origin of the money.

This came just two weeks after Deutsche reached a $7.2 billion settlement with the U.S. Justice Department (DOJ) over its selling and pooling of toxic mortgage-backed securities in the run-up to the global financial crisis.

Two years prior, Germany’s flagship lender had already received a record $2.5 billion fine for interest rate-rigging as part of the Libor scandal investigation, spanning regulators on both sides of the Atlantic.

Also in 2015, following the Libor fines, the bank agreed a batch settlement of $258 million with U.S. regulators for violating sanctions against a number of countries, including Libya, Syria, Iran and Sudan.