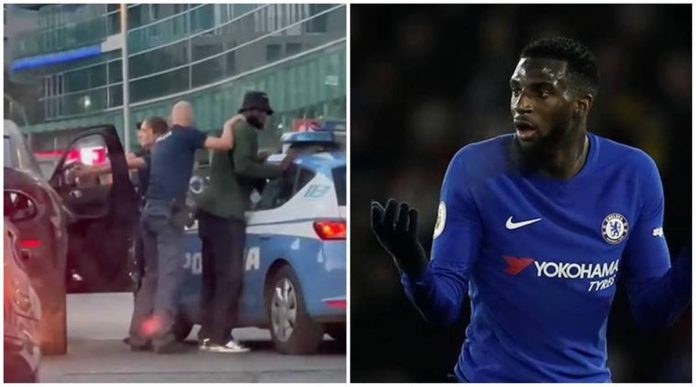 Departing Chelsea midfielder, Tiemoue Bakayoko, has broken his silence after being held by Italian police at gunpoint a few days ago.

Bakayoko insisted that the Italian police ‘went too far’ after he was stopped at gunpoint in a terrifying ordeal that turned out to be a case of mistaken identity.

The 27-year-old was pulled over by cops in Milan earlier this month, but footage of the incident only emerged this week.

Also read: Dr. Oz Has Weirdest Explanation For Why No One Is Donating To His Campaign

A policeman pushed the frightened football star, who made 14 Serie A appearances for the triumphant AC Milan last season, up against a police car.

He appeared to empty Bakayoko’s pockets and threw the contents onto the roof of the police car while two other cops pointed their weapons at the midfielder’s car.

One female officer kept her gun trained on another occupant of the car while the incident unfolded.

However, it appeared to gradually dawn on the police that they had the wrong person and they immediately holstered their weapons and consoled Bakayoko with a gentle pat on the back.

Bakayoko, who was on loan at AC Milan last season, has now spoken out about his ordeal.

He said that while he understood the police officers made a mistake, he believes they ‘went too far’.

“Authorities stated it was a mistake, and they realised only in real-time,” Bakayoko said as quoted by Daily Mail. Wowplus.net

“Being wrong is human, no problem with that, but the way they used those have been a problem for me. I believe they went too far.”

Bakayoko signed for Chelsea from Monaco for £40m in 2017.

The midfielder is understood to have agreed to a deal to join French Ligue 1 side Marseille this summer.