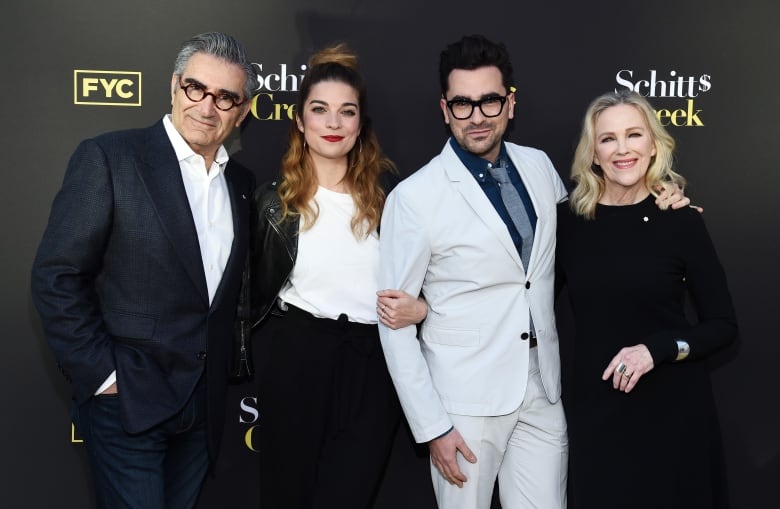 Canadian Dan Levy, showrunner and star of the TV comedy Schitt’s Creek, received a GLAAD award Saturday evening in San Francisco for promoting LGBTQ acceptance and credited a supportive network, including his family, for giving him the courage to come out during his teenage years.

“Had I not had the love to give me a sense of security, I don’t know if I would have found my way out of the closet, let alone create the opportunity for myself to tell stories on TV that have affected some kind of positive change in the world,” Levy told the audience at the gala event.

“Support, encouragement and love: Three relatively simple acts of kindness that can change the course of a person’s life.”

GLAAD, an LGBTQ advocacy group, gave the Toronto-born star its Davidson/Valentini Award, given to someone who “has made a significant difference in promoting acceptance for the LGBTQ community,” according to the GLAAD website.

The award is named after Craig Davidson, GLAAD’s first executive director, and his partner Michael Valentini.

Levy joked on stage that he was an “out and proud gay Emmy loser.”

The riches-to-rags sitcom Schitt’s Creek, which began on CBC and was co-created with his father Eugene Levy, was a best comedy series nominee at the 2019 Emmy Awards, but lost to the British show Fleabag.

Schitt’s Creek centres on a family that loses its fortune and is forced to relocate to a small town. Levy’s character, David Rose, is pansexual — meaning he’s open to all sexual orientations and gender identities — and as such, became among the first depicted on television.

The character’s sexual preference was explained in the show’s first season (using a metaphor of wine) and has been widely commended since for being written with acceptance and without homophobia.

“I like the wine, and not the label,” Levy’s character famously responds after being asked about his sexual preference.

Levy, who has experienced a steady rise in Hollywood since Schitt’s Creek became available in the U.S. through Netflix, signed a three-year deal with Disney’s ABC studios recently to develop and produce projects. He took home an MTV Award in June for best comedic performance.

The Canadian has participated in fundraising efforts to support GLAAD. Previous winners of the Davidson/Valenti award include CNN host Don Lemon and singer-songwriter Adam Lambert.