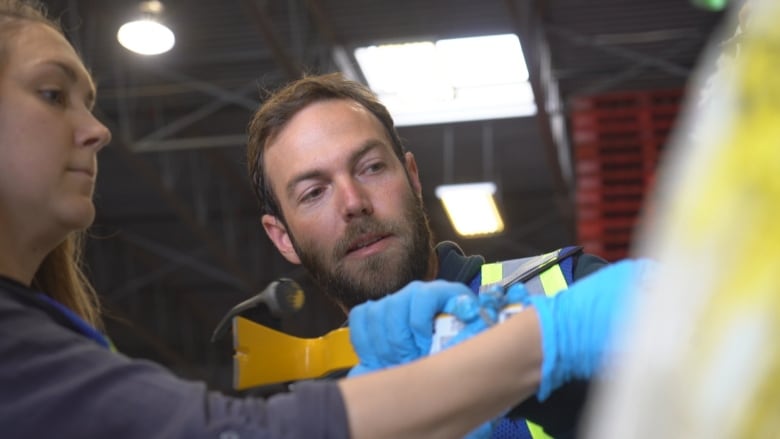 Do you know where your recycling really goes after it’s been picked up?

Journalists bought bales of film plastic ready for recycling, hid trackers inside them, and then re-inserted the plastic back into the recycling stream in British Columbia — the province known for having the most efficient recycling program in Canada.

Using an alias email, Marketplace reached out and commissioned three major waste collection businesses with ties to municipal programs in B.C. to process the material. The bales were picked up by Merlin Plastics, Waste Connections of Canada, and GFL Environmental Inc.

Marketplace put those promises to the test, acquiring about nine tonnes of film plastic, mostly shopping bags, that had already been sorted and crushed into square bales. Since the bales were already compressed and ready for processing, the trackers wouldn’t get crushed or lost in the sorting process.

Next, the Basel Action Network, a U.S. charity that combats exports of hazardous waste from industrialized countries and specializes in tracking waste, installed tracking devices into nine bales — three for each company.

Once activated, the tracking devices pinged every two to three minutes with their geographical co-ordinates. Although three trackers failed, two for each company reached a final destination.

Only 1 company recycled the plastic

The two trackers in Merlin Plastics’ bales ended up at a recycling processing plant in Delta, B.C., suggesting it was recycled. The company later confirmed in a statement to Marketplace that it “shredded, washed and pelletized it, then sold the resin to a customer that make[s] similar material.”

Both of the GFL trackers went straight to a waste-to-energy facility, a landfill alternative that creates power by incinerating garbage. The harmful acid gases emitted through the burning process become trapped in the incinerator and are then treated with chemical “scrubbers” that convert them into neutral salts.

“I think most Canadians think that when they put something in recycling, that it’s being re-fashioned into something that can be used,” said Myra Hird, an environmental studies professor at Queen’s University and founder of Canada’s Waste Flow research group.

One problem with incineration as a recycling solution, Hird says, is that the waste-to-energy incinerators constantly need to be fed large amounts of material. Another concern is the toxic ash incineration leaves behind.

“That waste that is produced then has to be landfilled in very [specific], highly engineered landfills for hazardous waste,” she said. “It’s far more toxic than the original products.”

In a written statement, GFL told Marketplace that while traditional recycling would have been a preferable solution, no one would have been willing to buy the processed plastic.

“The current market conditions do not have many opportunities to recycle this kind of plastic,” said GFL. “We found a viable and cost-effective solution in incineration.”

Meanwhile, when Waste Connections picked up the bales of plastic, the company said it would send the material to a recycling facility. However, the trackers showed that the bales ended up in a junkyard in Surrey, B.C., as well as a landfill in Richmond, B.C.

When Marketplace reached out to Waste Connections looking for further information, the company did not respond directly; it instead emailed the original alias and said: “There was some miscommunication and the driver took this load to a waste facility.”

It is not unusual for Canadian plastics to be landfilled. A recent study published by the federal Ministry of Environment and Climate Change revealed plastics are landfilled 86 per cent of the time.

“This is the opposite of what I think is happening to that magical blue box when it gets put out,” said Natasha Sumera, of Burnaby, B.C.

Like many Canadians, Sumera diligently sorts, cleans and recycles her waste every week. But she then goes even further to do her part for the environment.

Her municipality doesn’t pick up polystyrene products, so the 32-year-old spends time each week sorting through her condo building’s styrofoam and taking it to a recycling plant herself.

“Even when you make an effort to put it in the blue bin, if it still ends up here, that’s discouraging,” she said.

Hird said one reason Canadian plastic ends up burned or landfilled is the companies we trust to recycle that material aren’t always obligated to do it.

If the bales had been “collected from a residential premise and the hauler took it to a disposal facility, the hauler would be in violation of its contract,” the ministry said in a statement. However, waste collected outside the blue box program, from industrial, commercial or institutional sectors, “does not legally have to be recycled.”

“[They] are only going to recycle materials if there’s a profit to be made,” Hird said.

Profit varies depending on market conditions, she says, so a type of plastic that might have been recycled in January might be landfilled in December.

“I think it’s unethical because it’s deceiving Canadians,” she said.

Even when recycling does work, Hird says it takes a large toll on the environment, often being shipped to countries across the world to be fashioned into things like picture frames or other non-food-grade items, after which the quality of the plastic is often too low to be recycled again.

“We perhaps get one more use out of it and then it goes to landfill.”

She says Canadians should be focusing more on the top two tiers of the waste hierarchy: reduce and reuse.

The plastics industry has another explanation as to why recyclable plastic is being landfilled.

“It was too easy to ship material to China,” said Joe Hruska, vice-president of sustainability for the Canadian Plastics Industry Association.”They would take anything, and they’d actually pay for it.”

Now that China has shut its doors to our waste, Hruska says the government needs to put incentives in place for manufacturers to use recycled material here at home, to create a local market.

Behind the scenes: Marketplace installs GPS trackers in plastic bales

Marketplace hid trackers in bales of plastic from three different recycling haulers in B.C. to to see where it would end up. 0:37

According to Greenpeace, nearly half of Canada’s plastic waste exports were sent to China before the country cut its imports of scrap plastic in 2018.

Even when China was an option, the federal study of Canada’s plastic industry markets shows only nine per cent of Canadian plastics were getting recycled.

There’s been a global push to reduce our reliance on plastic, with a number of jurisdictions across Canada and around the world putting forth regulations, particularly around plastic bags. The federal government recently announced a plan to ban most single-use plastics by 2021.

But there has been pushback from industry who are fighting legislation that would ban bags from grocery stores. One of the CPIA’s members even went to the B.C. Superior Court to fight a plastic bag ban in Victoria. The city plans to seek a Supreme Court of Canada challenge.

Hruska argues meaningful alternatives to plastic grocery bags don’t yet exist and that he thinks bag fees are motivation enough to reduce consumers’ use. He also says his members are working on new technologies to make low-value plastics more recyclable.

But Hird says we can’t rely on the plastic industry to reduce plastic waste.

“What we need is a very strong government that is going to really introduce far stricter — and a greater number of — regulations around how we deal with our waste.”

The federal Ministry of Environment and Climate Change says it has committed to new restrictions on plastic that is sent overseas starting in 2021.

It also has plans to reduce plastic waste and pollution at home with new policies like the single-use plastic ban, and consistent “extended producer responsibility” programs that would make plastic producers responsible for the cost of recycling it.

But Myra hopes to see more incentives for reduction and refurbishment. “At the top of [the] waste hierarchy is a reduction, and that is what we really want,” she said. “Recycling should be really done as a last resort.”

As for Natasha Sumera, even though she’s disappointed to learn what may happen to her blue box items, she says she’ll keep on making the drive with her building’s recyclables.

“I want to be optimistic,” she said. “I try to reduce, but this, even more so, drives that home … If it’s not getting recycled the way that I think it should be, then I should probably even useless.”