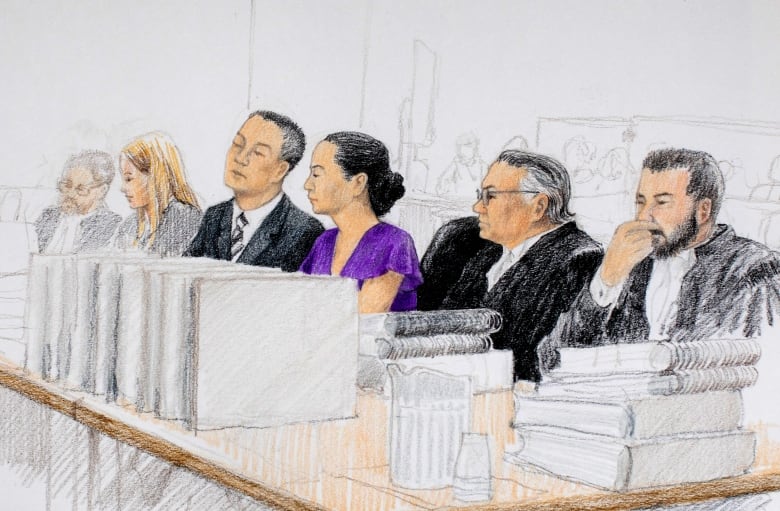 As Meng Wanzhou strolls the corridors of Vancouver’s downtown B.C. Supreme Court building flanked by advisers and security guards, she moves more like royalty than a woman facing the possibility of prison in the United States.

The chief financial officer of Chinese telecommunications giant Huawei will be in court for a second week on Monday, watching her lawyers as they attempt to access records of what they claim was a “covert criminal investigation” by Canadian authorities on behalf of the FBI.

Lawyers for Canada’s attorney general will take their turn in front of Associate Chief Justice Heather Holmes, arguing that Meng’s treatment by border officers and RCMP on the day of her arrest was nothing out of the routine.

If they’re right, it would be one of the few times that could be accurately said of any part of the Meng Wanzhou saga.

‘Well beyond any set of criminal charges’

Documents filed with the court in relation to this week’s application — which is not Meng’s actual extradition hearing — include the U.S. government’s outline of its case and an expert opinion for the defence, both of which highlight just how extraordinary a trial would be if Meng is ultimately sent to New York to be tried for allegedly violating U.S. sanctions against Iran.

Meng is accused of misleading banks about transactions that would have placed them on the wrong side of American sanctions.

“I am unaware that the U.S. has sought to prosecute any other person for the conduct for which Ms. Meng has been indicted,” wrote Bellinger, who now heads his own international law firm.

“These charges against Ms. Meng go well beyond any set of criminal charges related to violations of U.S. sanctions in Iran of which I am aware.”

Meng was arrested at the Vancouver airport on Dec. 1, 2018, after arriving on a flight from Hong Kong.

She was expecting to travel to Mexico City later that day, with a final destination of Buenos Aires.

The 47-year-old is accused of lying to an HSBC executive at a 2013 meeting meant to reassure the bank its business with Huawei was not putting HSBC at risk of violating U.S. sanctions against Iran.

According to court documents, HSBC was one of at least four multinational financial institutions alarmed at a series of Reuters stories detailing Huawei’s relationship with Skycom, a company that allegedly attempted to sell U.S. computer equipment to an Iranian company.

Huawei described Skycom as a “local partner” in Tehran. But the Reuters articles suggested that Skycom was actually a Huawei subsidiary.

Meng, who sat on the board of Skycom in 2008 and 2009, allegedly told the HSBC executive that Huawei was in complete compliance with U.S. regulations.

In Meng’s case, none of the transactions allegedly occurred in the U.S. — but prosecutors claim they have jurisdiction because money allegedly passed through the U.S. banking system.

Bellinger writes that he is “not aware of any previous criminal charges levied against a non-U.S. person” for the type of activity alleged of Meng.

Specifically, he says he’s “not aware of a case where a non-U.S. person has been criminally charged solely for having ’caused’ another” non-U.S. entity — in this case, a bank — to violate sanctions.

What’s more, Bellinger writes, when charges have been laid, they have normally been levied against institutions, not individuals — let alone someone like Meng, daughter of Huawei founder Ren Zhengfei.

Meng’s lawyers have also pointed to what they call “intimidating and corrosive” comments by U.S. President Donald Trump, who has suggested that Meng could be used as a bargaining chip in his country’s trade war with China.

Trump’s comments underpin an argument they hope will ultimately convince a judge to stay proceedings against their client for abuse of process.

Witnesses from around the world

In a record of the case filed with the court, prosecutors map out the types of witnesses a judge or jury might hear from if Meng were to be put on trial in the U.S.

They include former Skycom employees, now living in the U.S., who claim “Huawei and Skycom were indistinguishable entities.”

The HSBC executive who allegedly met with Meng at a Hong Kong restaurant in August 2013 will also testify that Meng spoke through an English interpreter as she gave a PowerPoint presentation on Huawei and Skycom.

Witnesses from other banks are expected to come from outside the U.S. to testify that they relied on Meng’s statements as they weighed the risks of continuing to clear millions in transactions for Huawei.

They also say the banks in question have “extensive documentation that accurately described” the relationship between Huawei and Skycom.

But the record of the case also hints at how complex a trial might be.

Two of the financial institutions named in the document — HSBC and Standard Charter Bank — entered into deferred prosecution agreements with U.S. prosecutors in 2012 for their own violations of U.S. sanctions against other countries, including Iran.

As part of those agreements, they would have been placing themselves in legal jeopardy had they had any new sanctions violations.

The deals also required them to work with U.S. prosecutors and provide witnesses for “related inquiries.”

Meng’s extradition hearing, which is likely to last only a few days, is set to begin in January 2020.

Later in the year, her lawyers will argue to have the extradition case tossed for alleged abuse of process related to the documents they are seeking in this week’s hearing.

But any final determination is likely still many court levels of appeal away, provided a solution isn’t found in the political arena.

A conclusion could take years.

And if it’s like any other element of Meng Wanzhou’s story, it will undoubtedly be anything but routine.