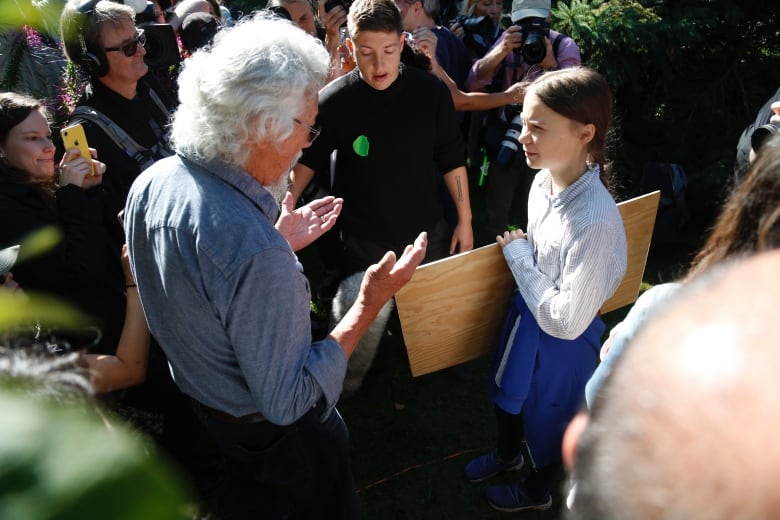 Swedish environmental activist Greta Thunberg praised those assembled Friday ahead of what is expected to be a march of hundreds of thousands of people in the streets of Montreal.

“I am very excited to be here and it is going to be very much fun today, to once again stand together with people from around the world, for one common cause,” said the 16-year-old, whose activism has made headlines around the world.

“It is very moving to see everyone, everyone who is so passionate to march and strike, people of all ages and all generations.”

Friday’s event comes in the middle of the federal election campaign and could be the largest environmental protest in the Montreal’s history.

Young people — many not old enough to vote — are demanding politicians adopt a climate action plan to reduce carbon dioxide emissions to zero by 2050.

Marches are planned around the world and elsewhere in Canada, including in Vancouver and Toronto.

Thunberg met with Indigenous youth ahead of the march, as well as with Liberal Leader Justin Trudeau.

She said afterward it was clear he hadn’t done enough as prime minister.

“My message to all the politicians is the same: to just listen to the science and act on the science.”

The driving force behind the march is students, and classes at many high schools, colleges and universities are cancelled for the day.

Thunberg’s presence in Montreal has created even more interest in the march.

Kah’hen:ientha Cross was among the students who gathered at Montreal’s Dawson College on Thursday to make signs to drive home their message.

She said she had planned to attend even before Thunberg confirmed she would attend, but knowing Thunberg will attend gave her “goose bumps.”

“I feel like she‛s not just motivated me. She‛s motivated many, many students.”

Cross said the growing environmental movement aligns with what she was taught as a youngster growing up in the Mohawk community of Kahnawake, on Montreal’s South Shore: don’t waste anything.

The protest in Montreal begins at noon ET at the foot of Mount Royal on Parc Avenue.

Many Montreal businesses, as well as unions and community organizations, are also closing for the day so their employees can attend the demonstration.

Police have warned downtown Montreal will be difficult to navigate, and Montreal Mayor Valérie Plante announced public transit will be free all day.

Plante estimates the protest could draw upwards of 300,000 people.

Culmination of yearlong series of strikes

Ben Clarkson, a spokesperson for La Planète s’invite au Parlement, said the Montreal gathering is the culmination of a yearlong series of climate strikes, which began in August 2018.

La Planète is one of the groups organizing Friday’s climate march whose name translates as “the planet goes to Parliament.”

More than 150 countries have since participated in the #FridaysForFuture movement, launched by Thunberg.

“We have a history of popular mobilization that the rest of Canada and maybe the rest of North America doesn’t have here in Montreal,” he said. “That’s been able to turn into and form into a very effective organizational group that has really grabbed onto this one day.”

The environment has emerged as a key issue in the election campaign.

The NDP’s Jagmeet Singh is attending a climate march in Victoria, while Conservative Leader Andrew Scheer is not planning to attend a march while campaigning in Vancouver.