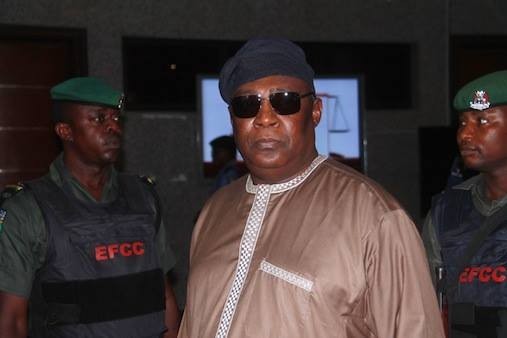 A video recording detailing how a bag containing $1million was found in a property linked to a former Chief of Air Staff, Air Chief Alex Badeh (retd), was on March 14, 2018 admitted as exhibit against him in a N3.9billion money laundering case brought against him by the Economic and Financial Crimes Commission, EFCC.

At the last sitting on February 28, 2018 the EFCC’s legal team led by Rotimi Jacobs, SAN, had through its PW20, Anna Awe Akuson, sought to tender a certificate of identification and a compact disk, detailing the search on the property where the bag of dollar bills was found.
The defence had however, objected to the admissibility of the documents, through its lead counsel, Akin Olujimi, SAN.

At today’s sitting, Jacobs applied that the video be played in open court, “so that it will not remain to be a sleeping document.” There was no objection from the defence.
Akuson, a cameraman with the EFCC, while being led in evidence by Jacobs, through the video which was played on a projector in the courtroom, then narrated how the $1million was found in a wardrobe in the house.

“We searched all the rooms, including the parlour, bedrooms, swimming pool, cinema room and bathrooms. We found furniture inside the house with ‘Badeh 9’ written on it. We found other carton(s) with ‘Badeh’ written boldly on it. In the parlour, there were some cartons containing furniture and pillows. We found a wardrobe that was not yet installed. We also found a knife with ‘Badeh’ written on it, as well as an inscription, ‘Pakistan Aeronautical Complex – A symbol of excellence in aviation”.

Counsel to the second defendant, S. T. Ologoorisha, however raised an objection arguing that the witness “cannot adduce evidence”.

“The video speaks for itself. The witness should not be allowed to supplement the video that is already being shown”, Ologoorisha said.

However, Jacobs argued that: “The video will remain a dormant document if it is not demonstrated by the witness as it cannot describe itself”.

Thereafter, Justice Abang allowed the witness to continue her evidence-in-chief.

Akuson, further told the court that:

We found $1million in the wardrobe. We found a bag inside the wardrobe and we opened the zip of the bag from the wardrobe. The two men in the video are operatives of the EFCC. The other man with the white T-shirt is a carpenter. The last man behind with the white t shirt and black is a neighbor’s security guard who witnessed the search. We found nothing in the other room. We brought the $1million dollars to the office and took it to the exhibit room. I recorded the exhibit keeper counting it.”

“The evidence I have given relates to what I did on 24 February, 2016. We carried out the search with 10 mobile policemen and two operatives.”

Justice Abang, thereafter, admitted the compact disc and certificate of identification dated 27th February, 2018 in evidence as exhibits T21 and T22 respectively.
The matter has been adjourned to March 27, 2018 for continuation of cross-examination and trial.