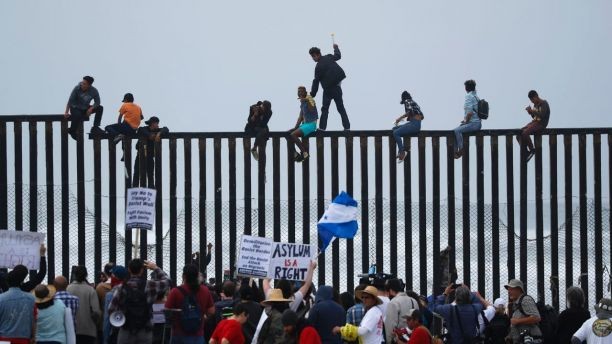 U.S. immigration officials said Sunday that the San Diego border crossing where hundreds of Central American immigrants intended to apply for asylum was closed due to high capacity — but many of the asylum-seekrs were preparing to wait overnight.

Customs and Border Protection (CBP) said earlier Sunday that the agency “reached capacity at the San Ysidro port of entry for CBP officers to be able to bring additional persons traveling without appropriate entry documentation into the port of entry for processing.”

Commissioner Kevin McAleenan told Fox News in a statement that immigrants “may need to wait in Mexico as CBP officers work to process those already within our facilities.” Border Patrol: Members of caravan illegally entered the US

Despite the announcement, about 50 people walked across a bridge and approached the port facility, but were not immediately accommodated by U.S. officials. They were being permitted to wait in passageways until room became available, and appeared prepared to wait overnight, according to Irineo Mujica, one of the organizers of Pueblos Sin Fronteras, an organization assisting the asylum speakers.

Another 50 prepared to camp outside a gate on the Mexican side of the border crossing with backpacks and blankets hoping to get their turn on Monday.

Immigration officials had warned that the San Ysidro border crossing may not be able hold many asylum-seekers if it faces too many at once. The port of entry, according to the agency, can hold about 300 people temporarily.

Roughly 200 people, including women and young children, were expected to turn themselves over to border inspectors after arriving in Tijuana last week, claiming they had a credible fear of persecution at home. Demonstrators gathered along the border to hold a rally in the hours before crossing over, with some people scaling the fence.

A demonstration on the border in Tijuana, Mexico, as a caravan of Central Americans prepares for their border crossing.  (AP )

“The only thing I would tell Mr. Trump is to have a conscious and to look at all the people and the way they suffer. Because the people, they are coming from those countries, they are not doing it for pleasure,” Osman Salvador Ulla Castro, who is from Honduras, told Fox News. “They face danger and extortions and they are looking for a better life.”

The Border Patrol said Saturday that several groups of families from the caravan earlier tried to enter the U.S. illegally by scaling parts of the “dilapidated scrap metal border fence” near San Ysidro.

“In several of these incidents, children as young as 4 years old, and in one case a pregnant female, were detected entering the United States illegally through a dark, treacherous canyon that is notorious for human and drug smuggling,” U.S. Customs and Border Protection San Diego Chief Patrol Agent Rodney Scott said. “As a father myself, I find it unconscionable that anyone would expose a child to these dangerous conditions.”

The Trump administration has been tracking the caravan since it started March 25 near the Guatemala border, calling it a threat to the U.S., in addition to promising a swift response.

The administration has also claimed the caravan represented a deliberate attempt to overwhelm the U.S. legal system and the courts.

Homeland Security Secretary Kirstjen Nielsen said last week that asylum claims would be resolved “efficiently and expeditiously,” but that the asylum-seekers should seek it in the first safe country they reach, including Mexico. Asylum-seekers typically are separated from their children and held up to three days at the border before being turned over to U.S. Immigration and Customs Enforcement. If they pass an asylum officer’s initial screening, they may be detained for several months until their court hearing or released with ankle monitors.

Nearly 80 percent of asylum-seekers passed the initial screening from October through December, according to the latest numbers available, but few are likely to eventually win asylum.

Members of a caravan from Central America walk next to the border fence between Mexico and the U.S., before a gathering in a park and prior to preparations for an asylum request in the U.S., in Tijuana, Mexico April 29, 2018.  (REUTERS/Edgard Garrido)

Administration officials and their allies claim asylum fraud is growing and that many who seek it are coached on how to do so.

U.S. immigration lawyers who went to Tijuana have denied coaching people in the caravan, but have said they have been providing one-on-one counseling to assess the merits of their cases and how asylum works in the U.S.

“Like how to defend myself with immigration, how to carry myself,” a 16-year-old unaccompanied minor from Honduras told Fox News on Saturday regarding the meetings he’s had with lawyers.

Central American migrants sit on top of the border wall on the beach in San Diego during a gathering of migrants living on both sides of the border, Sunday, April 29, 2018.  (AP Photo/Chris Carlson)

Heather Crone, of U.S. advocacy group Show Up for Racial Justice, said Sundays he’s found 80 people in America who have agreed to sponsor caravan members if they’re released while their petitions are pending.

Attorney General Jeff Sessions has called the caravan “a deliberate attempt to undermine our laws and overwhelm our system,” pledging to send more immigration judges to the border to resolve cases if needed.