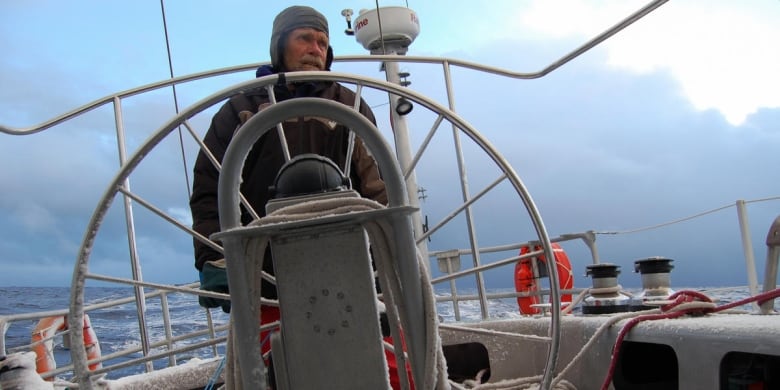 Canadian officials are disputing reports in Chinese media that a famous sailor from that country attempting to circumnavigate the Arctic was turned back in the Northwest Passage.

On Monday, the state-owned China Global Television Network (CGTN) reported that Zhai Mo and his two-man crew travelling aboard a 25-metre solar-powered yacht had entered the Northwest Passage and were sailing across Baffin Bay.

CGTN reported Thursday that Zhai had been “illegally stopped” in the Lancaster Sound, an area not far from Greenland’s maritime border with Canada. The report said he would return to China via the Panama Canal.

However, Transport Canada told CBC News in an email on Friday that it was aware of Zhai’s vessel, but said “at this point, it has not entered Canada’s Arctic Waters.” The Northwest Passage has been off limits to foreign pleasure craft since March 2020 due to an interim order from the Canadian government intended to limit the risk of introducing COVID-19 in remote Arctic communities.

Transport Canada said it was in touch with Zhai via email to inform him of the rule.

“Transport Canada has since seen public reports that Captain Zhai Mo no longer plans to pass through Canadian Arctic waters and the department continues to monitor the situation,” the department said in a second statement to CBC News on Friday evening.

Canada considers the Northwest Passage — a route connecting the Atlantic and Pacific oceans that weaves between the islands of Canada’s Arctic archipelago — part of its internal waters and subject to its laws, but the U.S. and some European countries dispute that claim.

Zhai’s trip through the area was expected to last less than a week. But some experts say it nonetheless posed a challenge to Canadian sovereignty in the Arctic.

“[If] any … sailor that is eager to go through the Canadian Arctic can just do so without seeking permission … that in itself is a challenge to Canadian sovereignty,” said Andreas Østhagen, an Arctic expert with the Fridtjof Nansen Institute, a research foundation in Norway.

“It’s a challenge to the Canadian ability to be present in its own Arctic territories.”

Zhai would be the second sailor to attempt to circumvent Canada’s interim order. In the summer of 2020, a sailor from New Zealand named Peter Smith tried to cross the Northwest Passage on a solo journey in a custom yacht, but was spotted by Nunavut land guardians and reported to Canadian authorities.

Transport Canada told CBC News it fined Smith for violating the ban, though it did not specify the amount.

Experts like University of Calgary political scientist Rob Huebert say controlling traffic in the Northwest Passage is key to Canada’s claim that they are internal waters — a claim disputed by the U.S. and other maritime powers that want commercial vessels to have a right of free passage on the route.

“Canada claims that the Northwest Passage are internal waters, and we do so so we can exert control over vessels that are not in our interest,” Huebert said.

In the case of vessels violating the ban, he argues, there are “clear security issues, and we should do everything we can to stop [them].”

Who is Zhai Mo?

Zhai is a professional painter, known in China for his impressionist art. Inspired by Paul Gauguin’s paintings of Tahitian women, he took up sailing so he could travel to the tropical island in the South Pacific.

In interviews, Zhai has frequently framed his long voyages as a quasi-spiritual pursuit of artistic inspiration. He told the United Nations his Arctic journey was to “raise awareness about the links between climate change and land degradation.”

But Zhai has also at times used his journeys to advance China’s global ambitions.

In 2013, escorted by the Chinese coast guard, he sailed to contested waters in the East China Sea and planted 100 Chinese flags offshore of the disputed Senkaku/Daiyou Islands.

“Even though we were just a few people on a sailboat, we voiced our opinions to the people of Japan and other countries,” China’s Global Times quoted Zhai as saying. “We got there and we claimed our sovereignty.”

In 2015, he undertook a journey along the so-called Maritime Silk Road to advertise China’s Belt and Road Initiative, a policy designed to spread the country’s international influence through billions of dollars in global infrastructure investments.

Zhai’s journey through the Arctic, which kicked off in Shanghai on June 30, has likewise received extensive coverage in Chinese state-owned media, and particularly on CGTN, which has embedded cameras on board his ship and refers to Zhai as “our sailor.”

Zhai’s journey comes as China increases its efforts to project greater influence on a melting Arctic.

In 2018, with the publication of its Arctic strategy, China declared itself a “near-Arctic” state. Internally, it describes the Arctic as a region “ripe for rivalry and extraction,” according to an analysis by the Brookings Institute, a Washington, D.C.-based think-tank.

Its proposed Polar Silk Road is to encourage greater commercial travel through the Arctic, and the China Ocean Shipping Company, which is sponsoring Zhai’s voyage, has already undertaken numerous test sailings of Russia’s Northern Sea Route, a passage that runs along the northern coast of Eurasia.

Polar experts like Østhagen doubt Zhai’s journey was a deliberate attempt to test Canadian claims to Arctic sovereignty. But it may serve other purposes for China’s Arctic ambitions.

“It is a national attempt by China to write itself into the Arctic’s history,” wrote Elizabeth Buchanan, an expert in polar geopolitics at Australia’s Deakin University.

A celebrated Chinese icon circumnavigating the Arctic would be a powerful symbol, Buchanan says, which could boost support for further actions in the region.