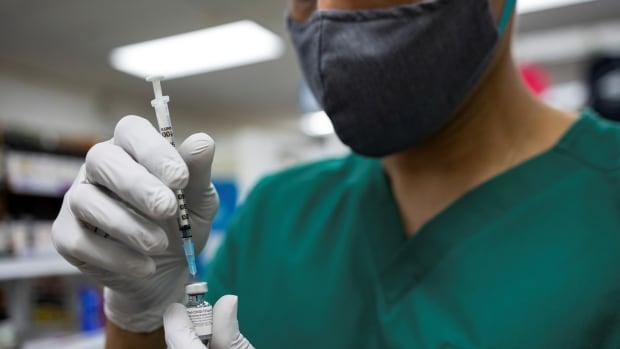 The demand for COVID-19 vaccinations tripled in Alberta on Thursday, the day after Premier Jason Kenney announced the province’s version of a vaccine passport.

Alberta Health reported 28,158 doses were administered at Alberta Health Services clinics and pharmacies on Thursday compared to 9,750 on Wednesday.

The new program will allow non-essential businesses like restaurants, pubs and fitness centres to operate normally if they require patrons to show proof of vaccination or a privately-paid polymerase chain reaction (PCR) test from the previous 72 hours with a negative result.

Businesses that choose not to screen for vaccination status will continue to be subject to restrictions.

For example, a restaurant that doesn’t screen patrons for proof of vaccination would be closed to indoor dining and would have to end liquor service at 10 p.m.

Normally, staff at the MacTaggart Shoppers Drug Mart handle about five to 10 walk-in appointments each day.

On Thursday, they administered 60 injections, an “extremely large proportion” of them first doses, she said.

“That announcement was the push that we needed to get those fence-sitters, those that were potentially a little bit hesitant about getting the vaccine,” she said. “That definitely gave people the push to come in and get that first dose done and start their series.”

Pharmacists saw an uptick of interest in areas of the province that have some of the lowest vaccination rates.

In the High Level region, located in the northwestern corner of the province, only 17.2 per cent of eligible Albertans have received at least a first dose.

The Pharmasave drug store in Fort Vermilion, about 80 kilometres east of High Level, now has about 20 to 25 people on a waiting list. The pharmacy is out of vaccine due to a temporary shipping issue.

Kenney and his UCP government resisted implementing a vaccine passport for weeks, even offering a $100 gift card to anyone who received their first or second dose.

That measure resulted only in a modest increase in vaccinations.