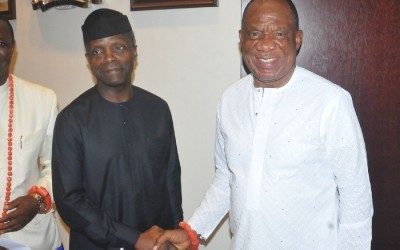 The Senate and the House of Representatives, on Thursday, replied Acting President Yemi Osinbajo over his comments on the 2017 budget after appending his signature to the appropriation bill.

Osinbajo was reported to have queried some “alterations” in the budget by the National Assembly, saying they would affect the plans of the executive to execute the projects that were altered.

A member of the House of Representatives, Mr. Abubakar Lawan, had brought up the Acting President’s post-budget comments on the floor under matters of privilege at the session, which was presided over by the Speaker, Mr. Yakubu Dogara.

He cited Daily Sun and Daily Trust among newspaper publications he said quoted Osinbajo’s comments on the powers of the National Assembly to alter the budget.

Lawan noted that if Osinbajo continued to comment on a budget he signed into law, he was undermining the legislature and also assuming the duties of the judiciary at the same time.

“These comments have been coming and they are reported in the newspapers.

“Is the power of appropriation no longer with the legislature?” Lawan asked.

He spoke amid applause on the floor, following which Dogara summed up the position of the House.

The speaker said there was no need to debate the issue further because there was “no debating the fact that power of the purse resides with the legislature.”

The speaker expressed surprise that Osinbajo would question the powers of the National Assembly on appropriation.

He reminded the Acting President that on matters of legislation, the National Assembly had powers, including the power to override the President’s veto on any bill.

Dogara added, “We all know where these powers are and under our watch, there is no way this House will be a rubber stamp of any executive.

“As a matter of fact, I don’t even want to believe that the Acting President made those statements.”

Osinbajo had signed a budget of N7.441tn into law on Monday.

One of them was the Petroleum Industry Governance Bill, which had already been passed by the Senate.

The PIGB deals strictly with governance issues and the role of the Minister of Petroleum Resources and the ministry in a liberalised oil and gas industry in the country.

The second bill deals with Host Communities’ rights, while the third bill sets the guidelines for investments and operations in the Upstream and Downstream sectors of the industry.

The three bills, though dealing on the same subject (oil and gas industry), were separated so that the various aspects of the industry would be thoroughly addressed.

Dogara explained that this was to avoid the pitfalls of the past when the PIB failed because so many issues were lumped together in one bill, causing setbacks for the legislation.

“During the planning stage for the PIB, we invited many experts from across the globe.

“The consensus we arrived at after collating their views was to split the issues and take them separately,” the speaker stated.

Speaking on the objectives of the three bills, the Chairman, House Committee on Petroleum Resources (Upstream), Mr. Victor Nwokolo, said they would reform the industry to open up more investment opportunities and bring higher revenue returns to the Federal Government.

Nwokolo explained that with the PIB in place, many existing laws, including the 1969 Petroleum Act, would give way.

The Deputy Chairman, Committee on Petroleum Resources, Mr. Joseph Akinlaja, spoke more on the changes, “The host community problem in the oil industry has been an issue over the years since oil was struck in the late 60s.

“In this bill, we are saying that some percentages of the revenue should go to the host communities.”

The three bills were passed without opposition, leaving Dogara to set up an ad hoc committee to work on them and submit a report to the House.

The Chief Whip of the House, Mr. Alhassan Ado-Doguwa, was named as the chairman of the committee.

At the Senate, the Deputy Majority Leader, Senator Bala Ibn Na’Allah, who raised a point of order at the plenary on Thursday, stated that the legislature was empowered by law to regulate government spending.

He stressed that the lawmakers could also adjust proposals in the appropriation bill.

Na’Allah said, “I rise this morning based on what happened yesterday in my office. About five senators bombarded my office, angrily complaining about a statement allegedly credited to the Acting President of the Federal Republic of Nigeria, Prof. Yemi Osinbajo, to the effect that the National Assembly does not possess any powers to alter the budget submitted to it by the executive.

“I have also had the privilege to work with the Acting President while practising in Lagos as a lawyer. We did a lot of cases together. He is somebody I know so much that I will rather believe that what was alleged to have been said could not have been said by him. And even it was, he must have been misquoted,” he added.

According to him, the Senate is to check imbalance in the legislation from the House of Representatives.

“The chambers are equal. There is nothing like upper and lower chamber as far as the Constitution is concerned. It is a bicameral legislature and the intention is to put in check whatever democratic decisions arrived at in the House to avoid domination,” Na’Allah stated.

Senate President Bukola Saraki, in his remarks, also said Osinbajo might not have questioned the powers of the National Assembly on budget amendment or the Acting President might have been misquoted.

ambiguity in the Constitution on our responsibilities. The matter has been cleared and settled,” he said.

But the matter took a dramatic turn when the Minority Leader, Senator Godswill Akpabio, raised another point of order to fault Na’Allah on the argument that the country operates a bicameral legislature of equal chambers.

Akpabio stated that the Senate was superior to the House of Representatives due to the fact that Section 81 of the Constitution gives the power to confirm executive appointments to the Senate while Section 5(4)(b) empowers the Senate to approve the deployment of the military on combat duty outside the country.

“These are powers not given to the House of Representatives and the framers of our Constitution knew that definitely, there must be an upper chamber.

“From the duties ascribed to both chambers, it is clear that one is the upper and the other is lower,” he said.

The Majority Leader, Senator Ahmad Lawan, however, raised another point of order to counter Akpabio’s arguments.

He stated that that the two chambers were equal even though the Senate was given more responsibilities than the House of Representatives.

He said, “I served as a member of the House of Representatives for eight years and came to the Senate in 2007. I think, in fact, I am convinced that no chamber in the National Assembly can (solely) make any legislation.

“If we cannot, as a Senate, pass a bill and send it for executive assent until it goes to the House of Representatives, it means that we have equal responsibilities on this. The Senate is only given additional responsibilities.”

Saraki, however, ruled Lawan out of order, noting that it was a controversial matter and the point of order under which the Majority Leader was speaking was not for such matters.