Blog: Want Lynchings To Stop? A Six-Point Guide For The BJP 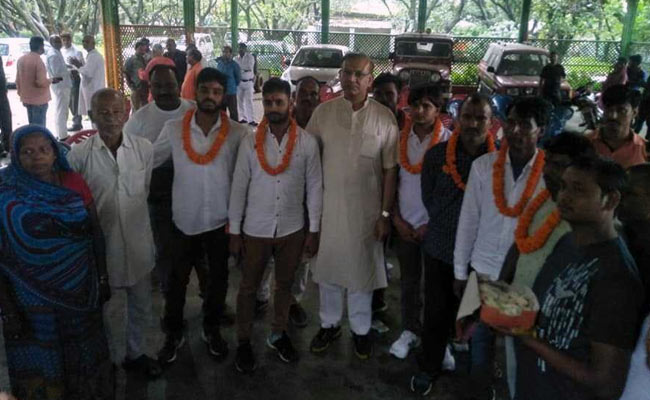 As outrage rises over cow-related lynchings, the government has responded by appointing a high-level committee to study the growing menace. They have also issued an advisory asking states to rein in the violence, the second in a month.

These generic measures have been received with skepticism, all the more given the ruling establishment’s ambiguous response to cow vigilantism.

Here are six concrete steps that the government and the BJP can take, which may be more effective in reducing mob attacks in the name of the cow:

1) Sack ministers, lawmakers or any party members who speak in support of or endorse in any way those accused in lynching cases.

The instances of these are several and rising. Whether it was a minister who attended the funeral of a murder accused in a lynching case in Uttar Pradesh, or another photographed garlanding eight men convicted for a mob attack in Jharkhand, there have been no consequences for elected representatives backing the alleged attackers.

This needs to change, immediately. Drop them from government, and if need be, from the party.

2) Be clear and unequivocal in your condemnation of cow lynchings

After every lynching it is commonplace for leaders of the BJP, and those of its ideological mentor RSS, to deflect attention from the crime. Instead, blame is shifted to cow smuggling or illegal cow slaughter, or love for the cow. Some have even taken to describing it as a conspiracy against the Modi government, or to beef-eating.

This is the same action-reaction logic apologists for terrorist groups routinely apply: “Yes, the bomb blast was terrible but..”

Put an end to such equivocation immediately. No more if and buts. Reprimand — publicly if need be — anyone who tries to deflect culpability.

3) Crack down on vigilante outfits, not victims

In almost every instance of cow vigilantism, the police appears to act as agents of vigilantes, rather than the target of the attack. The person beaten up is viewed with suspicion. Often cases are booked against the victim first, often without proof. The victims may even be beaten by the police.

This has to stop. Cow vigilante outfits are not sleeper cells in hiding. They openly advertise themselves and their vigilantism. It should be easy enough to find them and shut them down.

If cow protection groups want to pass information about potentially illegal activity, they must do so in strictly legal terms.

4) Give the police full rein to prosecute the accused

Give the police every indication that there is zero tolerance for cow vigilantism, and that the State does not in any way side with the attackers. (Point 1 and 2 are crucial in this regard)

5) Stop exaggerating the rhetoric of the ‘cow under peril’

Since this government has come to power, Indians may be forgiven to believe that there is a deep-seated crisis of illegal cow slaughter, which requires an iron-fisted response.

Yes, cow smuggling and illegal cow slaughter are a menace. But to amplify fears is dangerous and dishonest. The fact is that no government – state or Centre – has so far been able to produce a shred of evidence that there has been a sharp uptick of such illegal activity.

If anything, available data, be it the animal census, or dairy production, indicates the contrary — that the Indian cow is thriving.  (If at all it faces a serious threat, it is from a host of other factors, for instance the growing shift to buffalo cultivation).

Most Indian states have stringent anti-cow slaughter laws already, some dating back to over half a century. Yet, since 2014, a number of BJP-ruled states and the Centre made much of passing even more stringent laws restricting the slaughter, sale and transporting of cattle.

Laws are not the problem — enforcement is. The more you legislate, the more it stokes paranoia about ‘cow under peril’ (see point 5). And does nothing to help the Indian cow.

Reams of informed analysis show that over-legislation and unchecked criminalisation may actually the hurt the propagation of the sacred cow.

As we approach election season, it is for the BJP to choose whether it wants to continue with the more problematic aspects of its investment in cow politics, or opt for a course correction. If it’s the latter, then any one of the above steps would be a good place to start.

Disclaimer: The opinions expressed within this article are the personal opinions of the author. The facts and opinions appearing in the article do not reflect the views of NDTV and NDTV does not assume any responsibility or liability for the same.