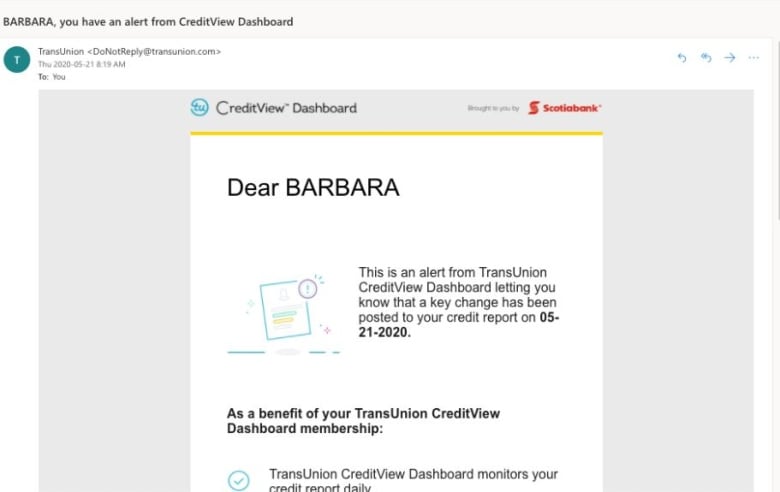 “I went from a near-perfect credit rating to one that is in the fourth out of five percentiles,” said Hewitt, who finished her Ph.D. in anthropology in 2013 and teaches at the University of Manitoba.

The bank handling Hewitt’s federal student loan made a report to credit rating agencies that her account was delinquent. That resulted in a drop in her credit rating.

“I was immediately angry,” she said. “Ever since I started repaying my student loans, I’ve not missed a payment. I worked hard to make sure that my credit rating stays good.”

RBC manages Hewitt’s student loan on behalf of the federal government. Every November or December, Hewitt sends the bank 12 post-dated cheques to cash on the first of every month so she is never late with a payment.

On March 18, the federal government announced Canadians with federal student loan debt would get a break from payments for six months, as a way to help stabilize the economy during the COVID-19 pandemic.

On April 1, the bank didn’t cash Hewitt’s cheque and a few weeks later, she learned RBC had reported her loan as delinquent.

“I happen to have an alert system with TransUnion so that when something happens on my credit report they notify me. So on May 12, I got a notification from TransUnion saying that RBC had reported me as delinquent on my federal student loans and my credit rating was subsequently being dropped,” she said.

Hewitt is one of a “small number” of student loan clients being affected by the implementation of the government’s changes to the loan program, said Robb Ritchie, a regional director of communications for RBC Royal Bank.

“In April, we experienced a system issue that delayed our ability to process student loan payments for a small number of clients in B.C., Saskatchewan, Manitoba, Nova Scotia, and New Brunswick,” he said. “We have identified the issue and are resolving it.”

The issue only impacted payments that were due to be processed in April, he said.

Ritchie wouldn’t say how many clients were affected, or what, if anything, RBC did to notify them of the problem.

Hewitt tried contacting RBC directly when she discovered the problem with her student loan but didn’t hear back. So she contacted her member of parliament, Conservative Marty Morantz, for help.

“Confusion about the Liberal emergency programs is a theme I have consistently heard, and it’s resulting in additional challenges during an already stressful time,” Morantz told CBC News.

“I’m pleased to see that this particular issue is being addressed by RBC.”

Hewitt would like the federal government to take some responsibility.

“I know this is a very fluid situation and I know things are moving fast. So somebody probably forgot a step along the way. But you have to own that. And just say, ‘Yep, we didn’t think about this,'” said Hewitt.

A government spokesperson explained the National Student Loans Service Centre is responsible for all Canada Student Loans disbursed since 2000, but prior to that, a small number of student loans were administered by private banks.

WATCH | How to handle cash during the coronavirus pandemic:

With recent efforts to limit the spread of germs and reduce contact, a look at how to handle cash during a pandemic. 0:56

“The Government of Canada has been made aware that one of these private banks has been experiencing technical issues that has prevented them from stopping credit bureau reporting for CSLs [Canada Student Loans] under moratorium,” said Marielle Hossack, press secretary to Employment and Workforce Development Minister Carla Qualtrough.

“The bank is working to resolve the issue and all negative credit reports will be retroactively corrected when the problem is fixed,” she said in an email. “However, the timeline for the resolution is not clear yet. Affected borrowers should follow up directly with their bank,” said Hossack.

RBC’s spokesperson said student loan payments will be automatically paused until Sept. 30, in keeping with the government’s program. If a client wishes to continue making payments during that time, they can contact the bank to do that, he said.

As for Hewitt’s credit rating, the bank said it would ensure her credit bureau score is corrected and up to date.

“We understand that this is a difficult situation for our client and regret any inconvenience this may have caused her,” Ritchie said.

“For the small number of clients who may be impacted by this, they will have their credit bureaus automatically amended so they no longer reflect reported delinquencies,” he said.