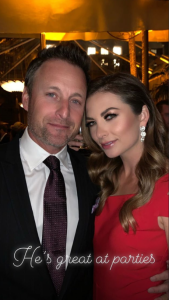 Chris Harrison has found a love of his own. The Bachelor host made his red carpet debut on Saturday, January 26, with new girlfriend Lauren Zima.

Harrison, 47, and the Entertainment Tonight correspondent stepped out together at Entertainment Weekly’s pre-SAG Awards party at the Chateau Marmont in West Hollywood. He wore a black suit and white shirt, while she was dressed in a bright red Likely jumpsuit.

ET reports that the pair have been dating for months and are “very happy.”

Zima posted a photo from the event on her Instagram account on Sunday, January 27, along with a red heart. Bachelor alum Ashley Iaconetti commented on the post, calling the pair her new fave celeb couple. The reporter also shared a photo with her man on her Stories, captioning it, “He’s great at parties.”

E! News reports that the pair were spotted showing some PDA at the event. “Chris had his hand on Lauren’s back as they waited at the bar,” an eyewitness told the outlet. “They looked very coupley and Chris was whispering in Lauren’s ear.”

Zima appeared to hint at her feelings for Harrison in an Instagram post on December 7, sharing a photo of herself and Harrison posing next to a poster of current Bachelor Colton Underwood. “The two most important men in my life, TBH,” she captioned it.

Harrison and wife Gwen Harrison divorced in 2012 after 18 years of marriage. They share two children, Joshua and Taylor. He was previously linked to season 17 alum AshLee Frazier and season 15 contestant Ashley Spivey.