Are You Sure Your Pastoral Calling Is Not From Satan? – Daddy Freeze Asks Actor Yul Edochie 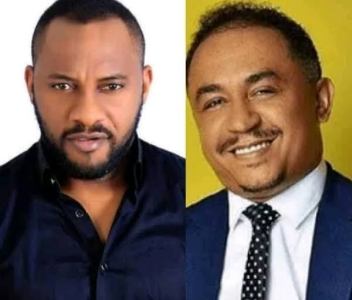 Are You Sure Your Pastoral Calling Is Not From Satan? – Daddy Freeze Asks Actor Yul Edochie

Very controversial on-air personality, Daddy Freeze has slammed Nollywood actor and politician, Yul Edochie who claimed recently that he knows that he has a pastoral calling to serve God.

“So much is happening recently that has left me in awe. In deed, I have a calling to serve God. A pastoral calling.”

But Daddy Freeze did not think Edochie had a calling from God, but suggested that such calling might be from Satan.

“I am hoping this your ‘calling’ is on God’s call log sha. Great way to showcase your ‘manifestations’ by telling people to disobey what Christ said in Matthew 5:44 and follow their emotions instead, like you recently suggested on twitter.

“Looks like a missed call in my humble opinion, don’t take it too seriously,” he said on his Instagram page.

“Are you even sure it was the LORD of heaven’s armies that called you, not the god of this world, Satan, as seen in 2 Corinthians 4:4? Because, for all you know, there could have been a gathering of the heavenly court as seen in Job chapters 1 and 2, where Satan had access to God’s phone and maybe called you?”