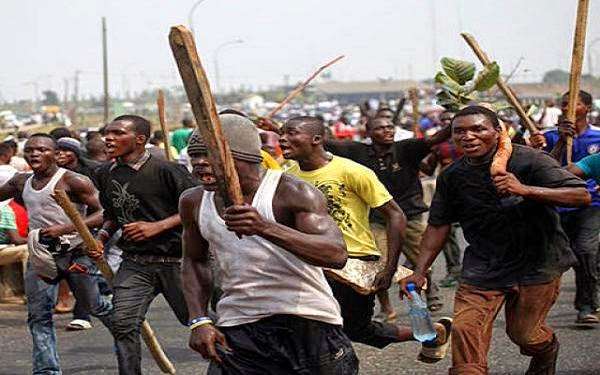 The Taraba police spokesman, David Misal said the Commissioner had gone to the tudunwada with a team of officers to restore normalcy following reports of youths unrest.

Rampaging youths in Jalingo on Monday attacked Taraba Commissioner of Police, Mr David Akinremi, with stones, injuring him on the head.

The  Command’s Public Relations Officer, ASP David Misal, who confirmed the incident to newsmen in Jalingo, said the Commissioner had gone to the tudunwada area of the metropolis with a team of officers to restore normalcy following reports of youths unrest.

” He was hit on the head with a stone resulting in serious bleeding before he was rushed to the Hospital, where he was treated and discharged.

“Since yesterday, some irate youths, armed with dangerous weapons,including cutlasses, axes and other objects, started disturbing the peace of residents around Tudun Wada and Gadan Boboji areas of Jalingo town.

“Our men were deployed there and normalcy returned.

“However, this morning, we got reports that the boys had come out again in large numbers, brandishing these weapons and attacking innocent citizens; the situation was so bad that the Commissioner of Police decided to go there himself with other officers.

“In the course of addressing the youths to calm them down, he was stoned in the head and was immediately rushed to the hospital,where he was treated of his injuries.

“For now, he has been discharged and is taking his rest at home.

“As we speak, a serious operation is going on there to calm the situation and forestall further breakdown of law and order in the area,” he said.

Misal warned that the command would not sit back and watch people take the laws into their hands by unleashing mayhem on innocent people.

He confirmed that at least 60 persons had so far been arrested.

“I can assure you that the command would make sure that normalcy is completely maintained in the area and the perpetrators of this crime  are brought to book.

“Let me use this opportunity to call on members of the public to always report any suspicious elements to the police promptly, with assurance that their identity would not be disclosed,” he assured.

The News Agency of Nigeria (NAN) reports that Jalingo, the state capital, has been experiencing breach of the peace in the past few weeks following  frequent attacks on innocent citizens by thugs who move around at night with dangerous weapon, disposessing people of their belongings.

Meanwhile, commercial activities have been brought to a halt following the temporary closure of the Jalingo main market and major shops in town.