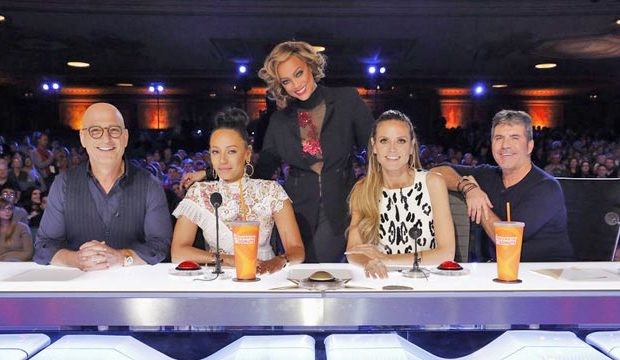 The Golden Buzzers keep on coming on America’s Got Talent. On the Tuesday, June 13 show, 16-year-old Christian Guardino took to the stage and sang The Jackson 5‘s “Who’s Lovin’ You.” Judge Howie Mandel gave the teenager the Golden Buzzer treatment, sending him straight through to the live rounds.

“Thank you so much,” Guardino said after receiving a standing ovation from Mandel, Simon Cowell, Mel B and Heidi Klum.

Mandel asked the singer, who was overcome by emotion, if he could make one wish, what would it be?

On the show, Guardino opened up about his condition, Leber congenital amaurosis. Doctors told him and his mother he would need to walk with a cane and his eyesight would never improve. That is until he was 12 years old and cured thanks to gene therapy. There’s even a National Geographic article about him.

“You were like a little mouse that turned into a lion,” Cowell said about Guardino, who was visibly nervous before starting to sing. “You are one of my favorite contestants I’ve seen this year. Not only in terms of your voice. I just like you. There’s something about you, and it’s just the best possible feeling when we meet someone like you.”

Last week, Cowell used his Golden Buzzer privilege to send deaf singer Mandy Harvey to all the way to the live rounds.