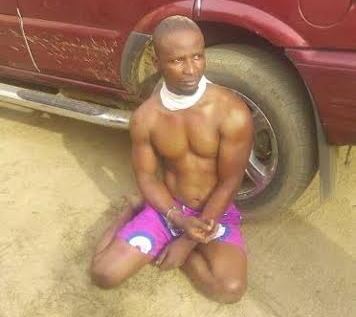 38 year old Rasheed Ajibade, an Alfa, who was apprehended with Human parts including a decapitated head at Olu-Ode area of Osun state on Wednesday June 7th (Read here), says he planned to use the parts for money rituals after the Ramadan fast.

Rasheed who spoke with newsmen at the state police command in Osogbo where he was paraded, said his client was the one who provided the human parts for the money ritual. He denied being involved in the killing of the yet-to-be identified woman.

“I am an Alfa and a herbalist. There is a man who is also an Alfa. He came to my place and told me that he wanted to do money ritual. I told him that getting the materials needed for the ritual would be difficult but he agreed to bring the materials by himself. So, the man came on Wednesday morning from Aagba town with the human parts for the ritual. The body parts he brought are fresh human head, hands, inner parts and vagina. I did not know that he would bring the materials that morning. I told him that we are in the Ramadan period and he should wait till after Ramadan before I could do it. This is my first time of doing this kind of money ritual although I do other ones but not this type. The man told me he wanted to do money ritual and I told him the difficulty in finding the materials and he told me that he would get them and he did. I am a Muslim and I’m fasting also. Even when he brought the human parts, I told him that this is not the time for such work. The man told me the situations of things in his life and pleaded with me to help him to do it. He did not want the kind of money rituals that would not bring huge amount of money. He wanted the kind of ritual which brings huge amount of money.”he said

Share
Facebook
Twitter
WhatsApp
Pinterest
Linkedin
ReddIt
Email
Print
Tumblr
Telegram
Mix
VK
Digg
LINE
Viber
Naver
Previous article“I do not want to get married because everyone is doing it” – Tee-Y Mix
Next articleChigurl marrying as a virgin at 33, Teebillz opens up about Suicide attempt, Woman sets her husband ablaze over infidelity+ more on Ep.5 of Hot Topics