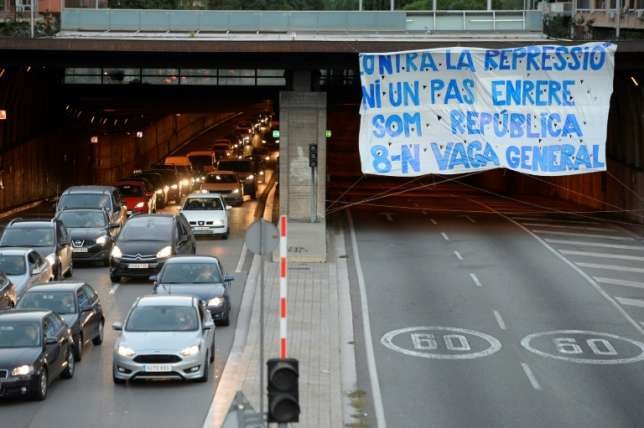 Protesters blocked roads, highways and train tracks in Catalonia on Wednesday as part of a region-wide strike called by a pro-independence union.

According to the Catalan Transit Service, people blocked roads in more than 50 places in the region, including major motorways like the AP-7 that links France with Catalonia and the rest of Spain, or the A-2, which goes from Barcelona to Madrid.

Spanish law prohibits going on strike for political motives, and the work stoppage was called by the pro-independence CSC union to protest job insecurity and a central government decree which made it easier for companies to move their legal headquarters away from the region.

But at a time of high tensions in Catalonia, which has come under direct Madrid rule after the regional parliament declared unilateral independence, the strike has taken on a political tint.

Groups of protesters carried separatist flags and banners calling for the release of sacked Catalan government members and civic leaders who have been jailed pending investigation into their role in Catalonia’s independence drive.

The work stoppage doesn’t have the support of Spain’s main unions — CCOO and UGT — but it is supported by Catalonia’s main public education union, USTEC, which means it could impact schools.

The two main pro-independence civic associations, ANC and Omnium Cultural — whose two leaders are currently in custody — also support it.

“Warning. Big problems at the heart of the commuter train system due to an invasion of people and objects on the tracks,” Rodalies de Catalunya, which manages commuter trains in the region, said on Twitter.

It was as yet unclear what the overall impact was on commuters.

But compared to the widely-followed region-wide strike on October 3 in protest at police repression of a banned independence referendum, Wednesday’s work stoppage appeared to be less followed in Barcelona.

Activists in Barcelona disrupted transport services, causing long lines of traffic on roads into the city.

Activists appeared to be concentrating on disrupting transport services, causing long lines of traffic on roads into the city.

“Services are affected due to blockages of roads and access to Barcelona,” the Mediterranean city’s public transport corporation TMB said.