A Little-Known Climate Fund Is Suddenly In The Spotlight 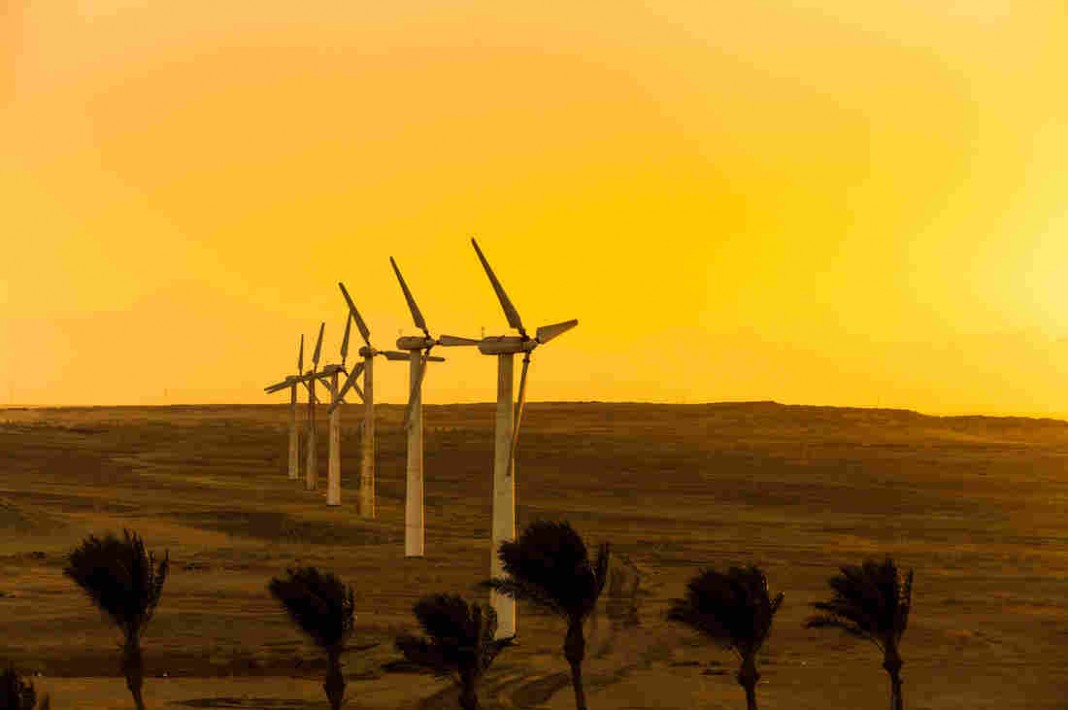 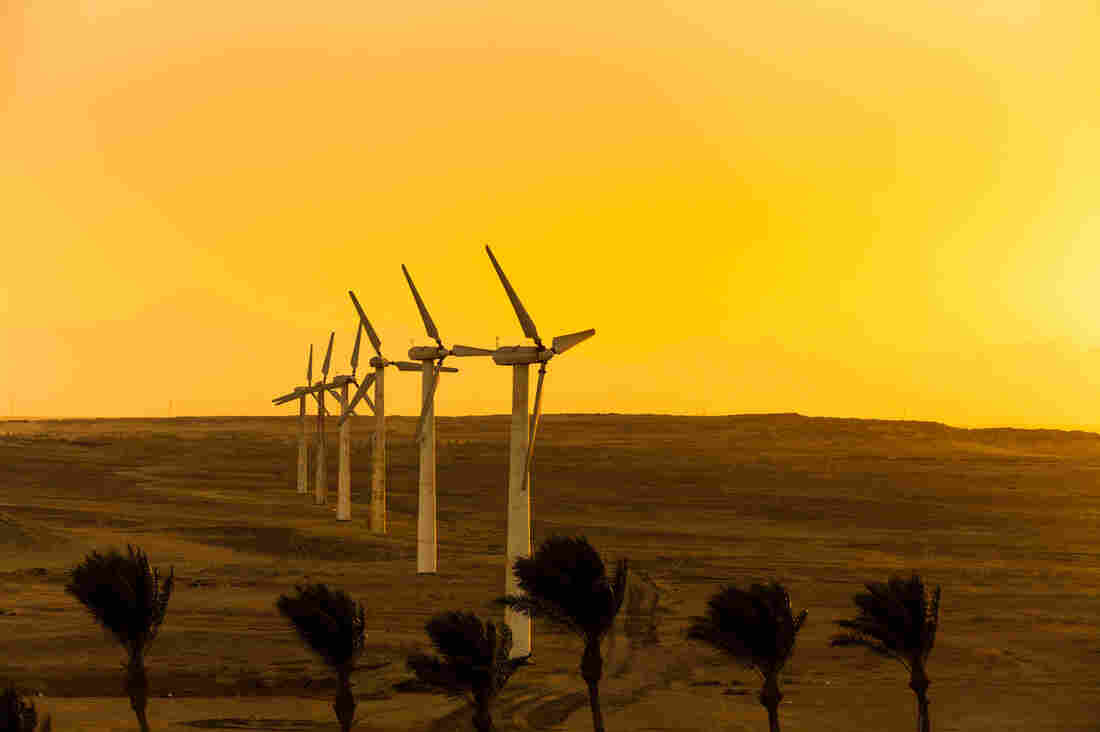 Wind turbines in Egypt’s Sinai Desert. Helping developing countries harness energy from the wind is one of the Green Climate Fund’s goals.

The Green Climate Fund has been thrust into the spotlight of late.

President Trump singled it out for scorn in his Rose Garden remarks last week announcing his decision to pull the U.S. from the Paris Climate Agreement. Along with that move, Trump noted, he is ending further U.S. contributions to the “so-called Green Climate Fund — nice name.”

Advocates for the environment have countered with op-eds in defense of the fund. Even comedian John Oliver jumped into the fray. In his Sunday night HBO show Oliver offered a point-by-point rebuttal of numerous incorrect statements that Trump made about the fund, including the erroneous claim that the GCF, which is funded through voluntary contributions, would “likely obligate the United States to commit potentially tens of billions of dollars.”

Yet it seems a fair guess that most people remain hazy on what the Green Climate Fund actually is — not least because the GCF is so “green” in the other sense of that word: It’s only just getting off the ground.

So herewith we present seven facts you might not know about GCF and its mission:

1) The GCF was created to exclusively serve low- and middle-income countries.

Specifically its mandate is to help developing countries reduce their emissions — so as to prevent further climate change — and adapt to the effects of climate change already occurring as a result of worldwide emissions. This includes supporting projects to build sea walls on the island nation of Tuvalu, create an early warning network to alert farmers in Malawi to floods and other disasters, launch energy companies that will provide rural people in East Africa with solar power and encourage investment in renewal energy companies in Argentina.

2) The GCF is pretty new. But it’s older than the Paris Agreement.

Five years older, to be precise. The GCF was formally created at the 2010 United Nations Climate Change Conference in Cancun. That said, setting up an international organization of the GCF’s scope and size takes time. So it wasn’t until 2013 that the GCF was in a position to hold its first round of fundraising.

Forty-three countries pledged a total of $10.3 billion to get the ball rolling for the first several years — though no exact time period was specified for how long that money is supposed to last. So far, the GCF has committed $2.2 billion to 43 projects.

The GCF was created as a vehicle to carry out one of the major commitments made by developed countries at the 2010 Cancun meeting: By 2020, they promised to “mobilize” $100 billion every year for climate change efforts in developing countries.

4) … but mostly this is about bringing in private funding.

“Mobilize — that’s the key word here,” says Leonardo Martinez-Diaz, a former deputy assistant secretary for Energy and Environment at the U.S. Treasury in the Obama Administration. The term was specifically chosen to underscore the understanding that only a portion of the $100 billion per year would come directly from rich country governments. The plan is to motivate mostly private sources of capital, for instance, for-profit corporations, to invest in efforts that help poor countries deal with climate change.

The GCF is designed to do this in a range of ways, says Martinez-Diaz, who is now global director of the Sustainable Finance Center at the World Resources Institute, an environmental think tank. For example, if a private company is leery of investing in climate projects because of political and financial risks, the GCF will offer it loans and loan guarantees and other forms of insurance.

5) The GCF has what one green researcher calls a “special sauce” that similar organizations lack.

Martinez-Diaz notes that the GCF was never meant to be the only channel for “mobilizing” the $100 billion per year that rich countries promised would flow annually to poor countries by 2020. “Not even as an intermediary or pass through” he says. “It was meant to be one of several financing mechanisms.” Other examples include multilateral development banks like the World Bank.

But the GCF has a lot more flexibility in how it can spend its money, notes Jessica Brown, of the Climate Policy Initiative, a research center that advises policy makers on green strategies. The World Bank, for instance, mainly gives out loans, which, by definition, must be paid back by recipient countries. The Bank can only give outright grants to a small subset of extremely poor nations. And it can’t generally be a direct co-investor in a for-profit enterprise. The GCF faces no such constraints.

In contrast to development banks and rich country governments, the GCF also has a governing structure that gives developed countries a say over which projects get approved. The GCF was set up within the umbrella of the United Nations system expressly for this purpose. And its governing board is equally divided between representatives of developed and developing countries — winning valuable “buy-in” from the recipient countries, says Brown, a former international climate finance negotiator at the U.S. State Department.

These two features are “the special sauce that GCF can offer,” says Brown.

Of the $10.3 billion that donor countries pledged to the GCF during that initial fundraising round back in 2013 the U.S. promised $3 billion. Under President Obama the U.S. has already handed over $1 billion in two installments of $500 million. The last one was disbursed in January, just before Obama left office. (The money is paid out of a general State Department fund over which the president has broad discretion).

Trump’s decision not to provide the remaining $2 billion effectively cuts the GCF’s total expected funding by about 20 percent — hardly peanuts. And various analysts say the loss of U.S. engagement in the day-to-day running of the fund could have less tangible but no less impactful downsides because the U.S. government has particular expertise when it comes to keeping multinational organizations accountable and effective.

But while Trump claimed in his speech that he had “terminated” the GCF, Melanie Nakagawa, a former deputy assistant secretary for energy transformation at the U.S. Department of State under Obama, notes that that the $1 billion that the U.S. did provide “is already in the system. The check is in and it is already having an impact.”

The GCF estimates that the 43 projects for which it’s started to disburse funds will impact a total of 128 million people. And it still has more than $6 billion left to disburse. During the initial fundraising round in 2013 the GCF agreed not to start its next round until it had allocated 60 percent of the money it had raised in the first. Though no timeline was set, many people expected this would take four to five years.

Now that the GCF will have less money, that date will presumably come sooner — some say as soon as 2018, notes Brown.

And Nakagawa says it’s entirely possible that by the time the GCF is in need of its next cash infusion it could find better favor from the U.S. “Four years from now another administration could decide to put the money in,” she says.

7) The world is still a long way from “mobilizing” — $100 million in annual spending on climate change challenges in developing countries.

Back when world leaders agreed to the $100 million goal, it wasn’t actually clear how much the developed world was currently spending. “The only really good data we have is starting in 2014,” says Martinez-Diaz. That’s from a 2015 analysis by the Organization for Economic Co-operation and Development and CPI. And it’s not very promising: It finds that the public and private sectors combined spent about $62 billion.