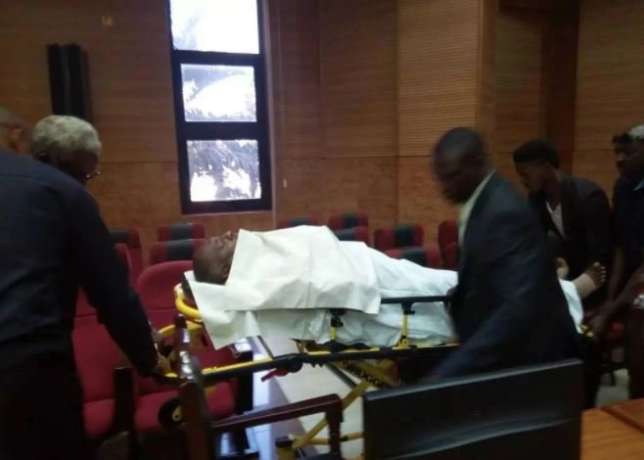 5 politicians who developed health problems while in court for stealing

Corruption cases in Nigeria have been known to cause an occasional ailment or two.

Former National Publicity Secretary of the People’s Democratic Party (PDP), Olisa Metuh, made a dramatic entrance into an Abuja Federal High Court on Monday, February 5, 2018 when he was wheeled into the courtroom on a stretcher after he arrived in an ambulance.

Metuh’s appearance was forced because an earlier plea to the court to adjourn trial due to his hospitalisation had been turned down by Justice Okon Abang who was unimpressed with the doctor’s note he sent (read full story here).

With Metuh’s histrionic on Monday, he joins a long list of Nigerian politicians who have developed health challenges after being accused of one form of corruption or the other.

Here is a list of some of the memorable ones:

play Former Minister of Petroleum Resources, Diezani Alison-Madueke revealed she was receiving treatment for cancer after corruption allegations started to pile up (The Boss Newspaper)

Former Minister of Petroleum Resources, Diezani Alison-Madueke, is like the gateway drug to corruption in Nigeria over the past few years as she has been linked to a plethora of money laundering scandals that are too many to count.

At the height of her powers, she was one of the most powerful members in former president, Goodluck Jonathan‘s cabinet.

Since that administration ended in 2015, Diezani has been plagued with so many accusations, as she faces criminal probes in Nigeria and the United Kingdom under suspicion of money laundering and its attendant crimes.

In 2015, a photograph of a physically-ravaged Diezani was published by the publisher of Ovation magazine, Dele Momodu, who confirmed that she had been receiving treatment for breast cancer, something she had denied before the allegations started piling up.

Many Nigerians still regard the release of the picture as a last-ditch attempt by the former minister to curry sympathy as revelations about her fraudulent financial dealings as minister continue to make waves every few months.

Former Minister of Aviation, Femi Fani-Kayode, is one of the most vocal voices of opposition in Nigeria, but he is also standing trial for N4.9 billion money laundering charge in court.

The 17-count charge against him includes alleged conspiracy, unlawful retention of proceeds of theft and money laundering in a case that also involves a former Minister of State for Finance, Nenadi Usman.

On Wednesday, January 31, 2018, Fani-Kayode failed to show up for a court hearing due to health reasons.

His attorney, Norrison Quakers (SAN), reported that he was hospitalised with a heart-related ailment and asked for an adjournment that was granted.

Fani-Kayode was not the first defendant to stall a trial with an illness.

In February 2017, Usman, also a former minister listed as first defendant in Fani-Kayode’s fraud trial, revealed to the court that she had been diagnosed with breast cancer.

She asked Justice Muslim Hassan of the Federal High Court in Lagos to permit her to travel abroad to receive treatment as recommended by doctors at the National Hospital after suffering a relapse after a surgery.

Justice Rilwan Aikawa granted Usman’s request in December 2017 and asked that her passport be released to her to enable her travel to the United States of America.

She was ordered to resume for the court’s hearing on January 31, the same day Fani-Kayode engineered an adjournment with his own hospitalisation.

Former presidential adviser on Niger Delta and Chairman of the Presidential Amnesty Programme (PAP), Kingsley Kuku, was rumoured to have fled Nigeria after he was invited for questioning by the Economic and Financial Crimes Commission (EFCC) in 2015.

The former aide to former president, Jonathan, responded to the rumours by releasing pictures of his knee operation in the United States and denied being a fugitive.

The EFCC had traced alleged mismanagement in the Niger-Delta amnesty funds to Kuku, who later launched an unsuccessful attempt in court to block the anti-graft agency from arresting him as he remains in the wind till date.

His aides while in office, Lawrence Pepple and Henry Ogbulue, were separately arraigned in court by the EFCC for criminal conspiracy and fraudulent acquisition of property as public servants.

Former Adamawa State governor, Bala Ngilari, was sentenced by the state’s High Court to five years in prison on March 6, 2017, after he was accused by the EFCC of processing a N169 million contract without due process.

Not only was he sentenced to a prison of his own choosing, he was controversially granted bail only weeks later after citing medical concerns that included high blood pressure, diabetes and insomnia.

His release was controversial as three senior prison officials were suspended after it came to light that the medical report that aided Ngilari’s release was not authorized by the prison authorities.

On July 20, 2017, a Court of Appeal in Yola dismissed all charges against Ngilari and set him free due to lack of merit and sufficient proof of the allegations against him.