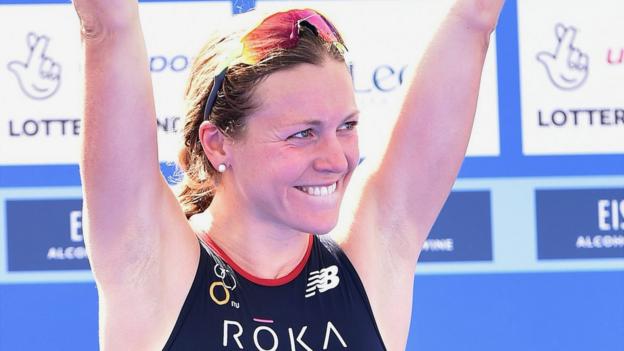 Holland, 32, who won individual bronze at the 2016 Olympics, came second to take the world title.

Zaferes was third behind Holland to finish second overall, with GB’s Georgia Taylor-Brown taking the bronze.

“I can’t actually believe it,” Holland said after finishing in a time of 01:52:00, just two seconds behind Australia’s Ashleigh Gentle.

“I thought at one point in the run that it was done, there was quite a big gap there. I can’t believe I brought it back in.

Find out how to get into triathlon in our special guide.

“This season as a whole has been absolutely incredible – three wins, two seconds and a world title. It’s so much more than I thought I would get out of this year.”

Holland, who had never won a world title, said she considered retirement after winning bronze at the 2016 Rio Olympics but found an “extra motivation” that has carried her close to the world title.

“If I’m honest, I wasn’t really thinking about it. This season for me had always been about the Commonwealth Games. That was what I had planned for all winter, that was what I was training for.

“Since that point, things have just fallen into place and I’ve just really enjoyed my racing,” she said.